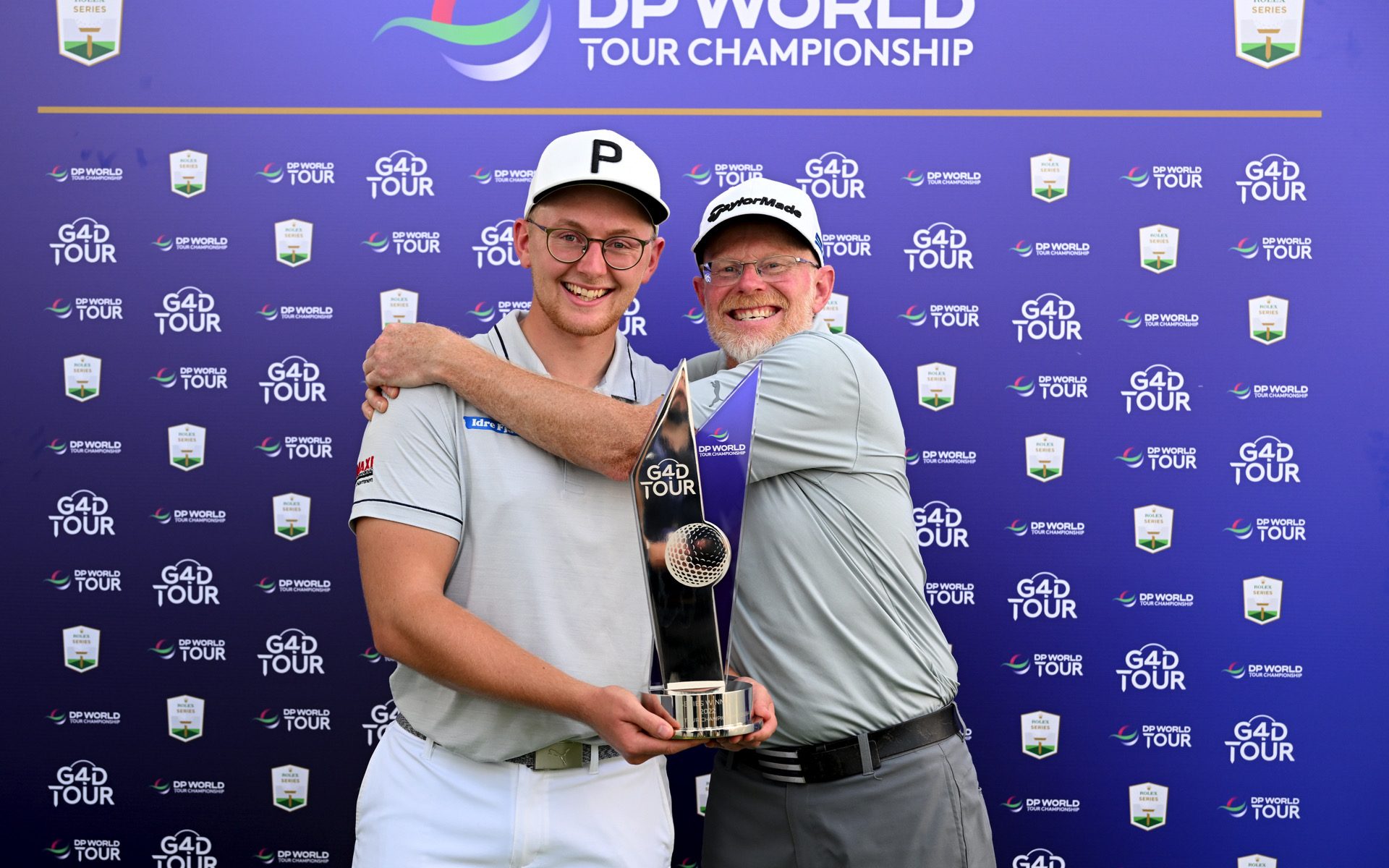 “And the EDGA events that he’s involved in, every time he travels, he gets a little bit tougher mentally, and takes care of himself. I think he has grown up quite fast.”

For Rasmus and Trond Lia of Sweden (top picture), it was a young man’s dream and a father’s proud moment, playing on the biggest stage, the 2022 G4D Tour finale in Dubai. But it was a dream moment very much earned as 21-year-old Rasmus Lia played his first EDGA event five years ago, and few would have worked harder to reach their potential in golf; from recovering from serious injury as a youngster, to travelling to the many EDGA tournaments in which he has competed, and the many hours of practice in the long winter closed-season at his home in Dalarna, when the snow has been falling outside.

Imagine the paternal pride when Mr Trond Lia was able to travel with Rasmus to Dubai after he had qualified for the season-ending G4D Tour Series Finale @ DP World Tour Championship in November, playing at the highest level of the G4D game.

Spare a thought for the father keeping all the joy, nerves, delight and near panic bottled up enough to avoid alarming his son, as he watched Rasmus recover from a triple bogey in round one, then a double bogey on the ninth hole in the final round (which saw his lead over the field cut from three shots to one), before unleashing a trio of consecutive birdies on the 13th, 14th and 15th. Then, just to give his Dad a little more tension, knocking his approach on the 17th into the water, but recovering to drop just one shot there before birdieing the final hole in style for a round of 72, calmly winning the championship by four shots.

Trond Lia laughs when he tells us: “Yes, I was very proud, but I was so nervous. So I think on hole number five or six, I said to myself, I can’t do this, I’m too nervous. I don’t know what to do. But I think… I hope it helped that I was with him, because I was carrying the bags to the locker rooms and fixing the drinks at the water stations, so he could just focus on his golf. He was very motivated.”

Rasmus had told his father that he felt he could win, that his game was now good enough, all being well.

Trond added: “But it was a very special moment, and especially to see all the other G4D Tour players I had met there. It was good to see them again. And all played at the same time, on the same stage, the same tee as the big Tour professionals… so it was a great experience.”

A wonderful day for father and son: Rasmus, the lad who played in his first EDGA golf event in 2017, aged 16, still growing and adapting after a horrific skiing accident aged 12 which broke a lot of bones in his back, pelvis, hip and leg. And back in 2017, this very shy young man nevertheless was invited to play in a unique one-hole exhibition match during the European Tour’s Portugal Masters, featuring four EDGA players and four European Tour players. This would be a landmark moment for golfers with a disability everywhere, effectively opening a window: the first EDGA event directly linked with, and supported by, the European Tour group. An idea, and a first taste, that would grow into the established G4D Tour we now see today. In 2022: seven tournaments staged by the DP World Tour, in the same weeks and at the same venues as the famous Tour events, culminating in November’s Series Finale in Dubai, won by Rasmus of course, completing a circle for him. There will be eight such events in 2023. At this G4D Tour finale, Rasmus was invited by DP World Tour star and fellow Swede Alex Norén to join him for a little practice on the day before the tournament. The 10-time Tour winner was generous with his time and gave Rasmus excellent advice on the playing conditions on course.

Trond says: “A really special moment was when we were going out for the first round… and Rasmus and I were standing in the rough around the practice green, just to try some chip shots. And Alex Norén comes by and said, ‘Ah, you’re playing today, play well. Let me see some of your good shots.’ Rasmus made a few chips and Alex said, ‘Ah, I don’t think that’s the right way to handle this course with this grass. I think you have to do it like this, because I’ve been in practice here for a long time. Try this shot.’ And Alex gave 15 minutes of his time just to make Rasmus comfortable with the shots from the rough around the green. So I think that was a very special moment, and very decent of Alex there, it was good.”

In the final round, the way Rasmus kept his cool and recovered after finding water on the 17th, earned the praise of playing partner and fellow G4D Tour front runner Juan Postigo of Spain (pictured below).

Trond says: “And we go back, drop a new ball, iron number nine, put it three-and-a-half metres from the hole, and he putts it in for a bogey. I remember Juan Postigo, he was really, really happy for Rasmus, that he made a bogey and not a double. This is you today, he says. So that was fun to hear.”

Trond, who is a ski patrol officer, a greenkeeper at their local golf course and a pretty good golfer himself, was rightly so proud. Less than two weeks later, Rasmus then went on to Vila Sol for the EDGA Algarve Open 2022 and won again, at the same venue where he made that EDGA debut in 2017.

Looking back to that time five years ago, Trond says: “It was the first time I went with him abroad, to another country in Portugal, with his coach from Sweden. And it was nerve-wracking just to watch. But it was great fun to see him tee off, for the first time in an EDGA event in Vila Sol. That was very special. And now his progress is just straight up.”

That progress has been so steady is down to Rasmus’s work ethic and also good coaching, most recently during his sports degree course at Halmstad University in Sweden.

Trond says: “Yes, I think so, because he has to swing a little bit differently than his other teammates in school. So the school he goes to now, most are 100% fit, and he is the one with the disability. And if I don’t remember it wrong, the school was very anxious to get Rasmus there and try and see how far can we get this young boy with the disability in golf? How good can he be? And the EDGA events that he’s involved in, just in Europe and everywhere else, every time he travels, he gets a little bit tougher mentally, and takes care of himself. I think he has grown up quite fast. So he’s a really young man, and he does everything, he fixes his hotel, fixes everything, flight tickets. It’s like five minutes, everything is done. He says ‘Dad, Just relax’.”

Trond explains that even as a young boy Rasmus had huge determination which was a driving force in his recovery after his accident and his desire to succeed in the future. Trond believes the announcement in 2021 of the seven-event G4D Tour for 2022 was also a huge motivation for his son: Rasmus competing last year in Italy, Ireland, Portugal, Sweden, Spain, at the U.S. Adaptive Open, the European Team Championship in Belgium, and then Dubai.

“I would say, extremely so. He wants to play everything, just to get ranking points to get into this tournament. That was his main goal all summer. He was extremely happy and very proud of himself, because he was working hard and he plays all the events for disabilities in Sweden. I think he won every one, which affects his ranking. And now he is, I think pretty safe in the top eight. Yes, that was a great motivation, this G4D Tour.” But Trond believes that without the EDGA Tour events, Rasmus may not have found the confidence to develop so well. Being naturally a quiet guy, the camaraderie of the tournaments and the welcome he received, was “fantastic” says Trond. There were 92 EDGA related tournaments around the world in 2022, and for a golfer with a disability, being part of a positive group with shared values can be vital.

Trond says: “Yes, of course. Everyone who I met in my EDGA events, I’ve been to a few with Rasmus, and he said everyone is having the most respect for each other, and everyone is very good friends and everyone has a different story, different backgrounds. Someone is born with a disability, another is there because of injury and other accidents etc. They have really good bonding, I think: everyone talks well about each other. So it’s really nice to see, and I’m extremely impressed with all the girls and the boys playing golf. And you see some can barely walk, but they hit the ball straight ahead. So it’s brilliant to see. I like it a lot.” Whether at an EDGA event at home in Sweden or the G4D Tour finale in Dubai, Rasmus’s approach is the same. Trond says: “His focus is extremely high. He doesn’t like to lose, that’s for sure. He accepts when he is beaten, of course, but he is very focused on winning everything. He goes for it, whether he is playing ping pong, or if it is skiing or golf, he was always want to win.”

Trond says that winning in Dubai was “huge” for Rasmus. “He was everywhere [across the media], and Rasmus liked it but at the same time he is not one to brag. He might have felt more attention than ever before, but he is very down to earth and I think that’s a good thing.”

Mr Lia comes across as one of the world’s less ‘pushy’ parents, he encourages rather than pressures both his children, Rasmus the golfer and daughter Victoria, who though a keen footballer, enjoys her artistic studies.

Trond says: “So encourage them the best you can. And they have to enjoy what they do. We have never put any pressure on that, not on Victoria, and especially not on Rasmus. They have to make their own decisions, what they want to do, and how much they want to do it. But in Rasmus’s case, you have to hold him back sometimes, because he wants to train 24/7. And when an injury occurs, he can’t train so much, because it’s too painful. So when Rasmus hits 10 drives, he’s done. He can’t hit 20 or 40 or 50 drives in a practice round. That’s impossible. So encourage the young ones, yes. Absolutely. But let them do it at their own pace. I think it’s important. Don’t pressure.” Rasmus always aimed high and continues to do so. The desire to leap further in cross country skiing caused life-changing injuries. That he is still striving and working to reach his best marks him out, but at the same time he is just one of the many golfers found throughout EDGA events, golfers with a disability with a rich myriad of stories, that are underlined by a strong will and usually a generosity in their thinking towards those around them. A way of thinking very much shared by his super-supportive father, Trond Lia.

While this story finishes, you can read or listen to the full story here of how Rasmus Lia recovered from the trauma of a serious skiing accident as a child, to find confidence and achievement through golf. It is a story worth sharing.