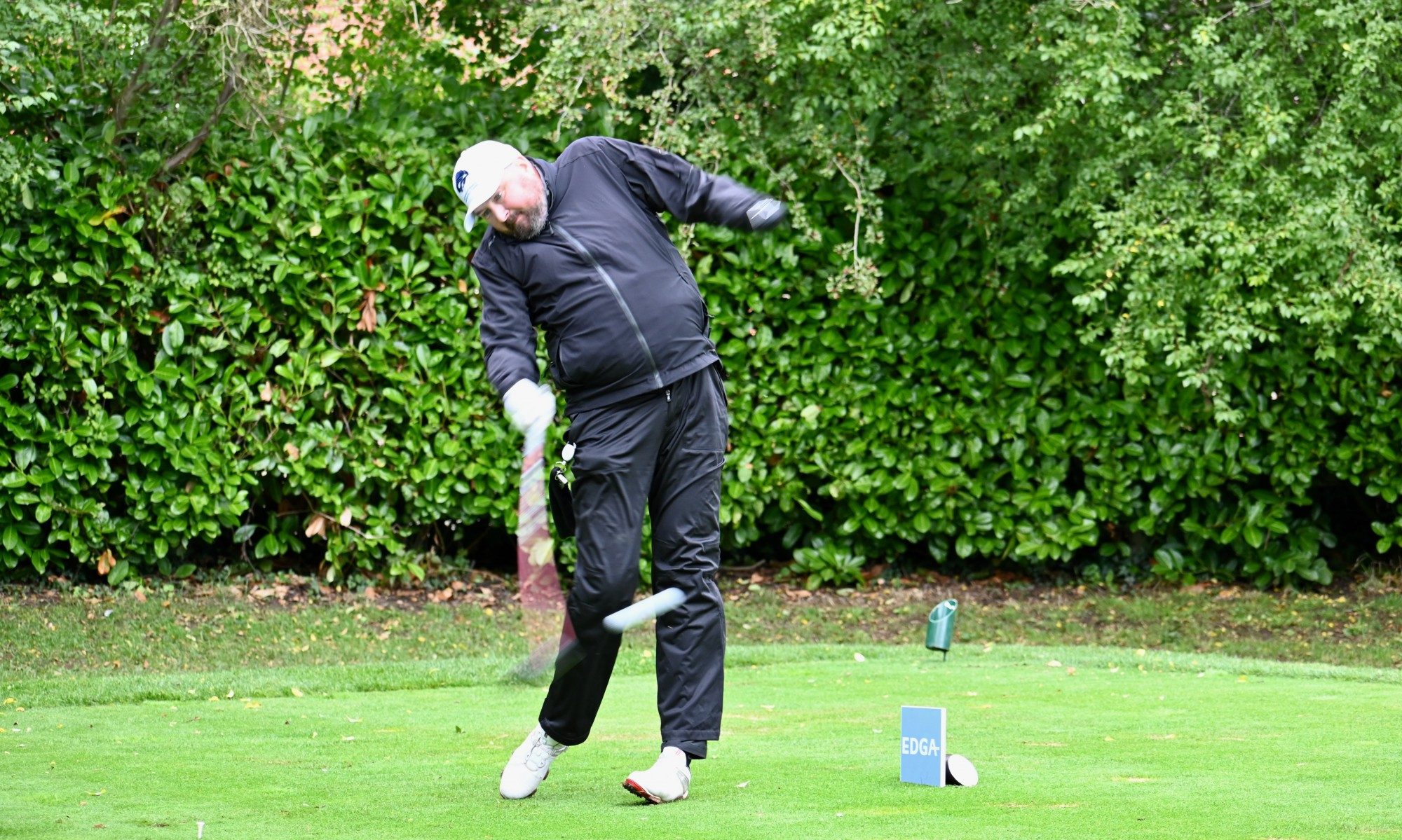 “As the only disabled player in my club, it seemed at first a bit far-fetched to start playing golf with one arm. There are other games that people think that would suit me better, but golf is for sure the absolute best way to participate in sport.” Per–Christian Nygren says that when he was a teenager, the sport of motocross was like a drug. While it gave him undoubted ‘highs’ which he remembers fondly, it would also come at a cost in the form of a major crash when he was aged 16; in which he received multiple injuries including a permanently paralysed left arm. Having experienced this trauma, his courage, the ‘never wanting to give up’, conflicted with the more safety conscious of his thoughts. So he would be back on his motorbike inside one year, riding one-handed, only for him to suffer a further injury in another, thankfully less damaging crash.

Today, Per-Christian still adores talking bikes but has long given them up. His need for competition and for absorbing action in the outdoors is now serviced by something altogether more mellow and enduring.

For a man who had to deal with life-changing injuries, competition with others on a golf course is just one small part of the positive effect of this sport; he also enjoys testing himself against the course itself while always seeking to improve his skills. Through sheer hard work (plus a lot of joy) he has turned himself into a golfer of some steel, with a rhythmical one-armed swing, holding the club in his right hand (like a tennis player in fore-hand), using his strength and timing to play off a 19 handicap which, at aged 49, is on the way downwards.

Per-Christian also refers to the camaraderie of playing with good friends, who know him by the nickname ‘Pekka’ (the running together of ‘Per’ and ‘Christian’). He talks of his love of the fresh air and the weather, the mental and physical health benefits for him but perhaps most of all, it has been his great good fortune that three generations of his family have all started playing golf together in just the last five years. Per-Christian’s father Krister started most recently, while his sons Anton, 27, and Albin, 25, began playing first for the family in 2016, and it was they who thrilled their Dad when they asked him to join them in learning the game. Sons, father and grandfather – and now foster daughter Tyra has also started to play – they can all take each other on. They are ‘all-in’ to use Per-Christian’s phrase. “My home course is a little local course, Kinds Golf Klub, which has 800 members; it is a great big family, I love the environment,” says Per-Christian, who also enjoys competing at nearby Boras GK, which has a large group of golfers with disability who are trained by much-respected coach Krister Andersson.

“And once again, that’s why I love golf so much, because you’re out and about, you’re enjoying the weather hopefully, and hanging with your friends and family. I mean, how many teenagers are willing to spend five or six hours with their parents?”

It was a pleasure to meet Per-Christian Nygren at Stratford-on-Avon Golf Club, England, in September 2021, when he was taking part in the RSM European Play-off Series, where he was one of 16 EDGA golfers who qualified for the final through the World Ranking for Golfers with Disability (WR4GD). At that time Per-Christian enjoyed a top-20 ranking in the Stableford division.

Talk to Pekka for five minutes and you know you’re in the company of an articulate and intelligent man with a playful sense of humour; his relaxed demeanour hints at the stoic philosophical outlook he has needed to make his way in life after his crisis as a 16-year-old.

Per-Christian started on his first mini motocross bike at the age of 10 and at 15 graduated to racing larger, more powerful machines. Enjoying regional success he was looking to qualify for the national finals in 1989. Riding his Italian-built Cagiva 125cc he one day made a small mistake and collided with a tree at about 50kmh. The smash left him with a paralysed left arm, and he was also paralysed in the front and back of the left shoulder; the key muscles that keep the head up were compromised, he suffered damage to the spinal cord and issues with balance which remain today.

Fortunate to survive, great support from his family meant that he was able to still live an active and enjoyable life as he started to work. He married and started his family. Per-Christian and his former wife Pernilla were also asked to foster a young Mum’s daughter, Tyra. Tyra is now 15 years old and lives happily both with her foster family and her own Mum. And Tyra has recently become a golfer too! The family lives in a small village 60km east of Gothenburg, and Per-Christian works as a buyer for car dealerships in Finland, Germany and Poland. The resilience he now exhibits on the golf course and the quality of golf he plays has brought attention to his region of Sweden. Golfers with disability here have been well supported by the Swedish Golf Federation and a select national group even received coaching from Swedish legend Henrik Stenson, creating much publicity that has helped raise awareness among their fellow Swedes.

He laughs: “For example, I have heard how I strike the ball more than 300 metres with one arm with my driver, and when I hear that I say, well… not quite, but thanks!

“And of course, as the only disabled player in my club, it seemed at first a bit far-fetched to start playing golf with one arm. There are other games that people think that would suit me better, but golf is for sure the absolute best way to participate in sport.”

He adds: “You’re playing against yourself, and I also like golf because you are your own referee, it’s a gentleman’s sport, you don’t cheat, you don’t improve your lie and that’s one thing I really love about golf.”

Per-Christian’s eyes light up when he talks of the golfing progress of the rest of his family. Anton plays off a handicap of 0.7, Albin is off 17, and young Tyra is also coming on very well. Pekka is clearly delighted that golf has given so much to his family.

“And I’m forever grateful for that, so now we are three generations playing together because my father started playing as well. Sixty-eight years old he started, and he is all-in, sitting watching YouTube tutorials.”

The family often asks, ‘Where’s Granddad?’, to find that he is at the driving range. Per-Christian started to explore competitive opportunities among golfers with disability, first through the Swedish Golf Federation and more recently through EDGA, with the net result that he has been able to encourage a few more people to join him in this sport.

In his area of Sweden, they hold ‘a week of sport’ once a year, where they encourage new participants, and Per-Christian saw the promotion of a ‘handigolf’ event for golfers with disability.

“So I called the Swedish Golf Federation and asked ‘Am I disabled enough to join in?’ Yes of course you should join us they said, and I won the tournament! That was a shock, so from that day, I’ve been all-in with the paragolf.

This would lead to Per-Christian then applying for his EDGA player pass and access to its diary of events and he has played in these in Sweden, Spain, the UK and Portugal. The ranking points he has amassed in such tournaments qualified him for the RSM Play-offs in Stratford-on-Avon, where he was delighted to renew his friendship with Magnus Grimberg, a golfer from Halland in Sweden, who is registered blind. The two men both share a sharp wit and underlying sensitivity of the need to raise awareness to help other people with disability to enjoy the game. They formed a popular pair in Stratford both on the course and in the bar.

In the clubhouse, Per-Christian pointed out a local hero, Samuel Ryder, a former president of Stratford GC, saying it was “fantastic” to see an elegant oil painting of Ryder near the bar and to find himself playing at this historic English club. Per-Christian and Magnus wouldn’t lift the RSM trophy in this week, but their positive outlook ensured they were great ambassadors for Sweden among the field assembled from across Europe.

As a youngster, Per-Christian also played football, ice hockey, and had good hand-eye coordination. So one can see why, using one arm, golf could be an option. At the same time, we have to consider the amount of hard work on the practice ground that is needed to learn to hit long and short shots, one-handed. It can be very difficult to keep progressing; so what is Pekka’s secret?

“My biggest asset I think is that I don’t give up. I try, try. When my youngest son competed in motocross I could spend four hours in the garage just to change an air filter because with his Honda 250cc motorbike, you have to come up, down, through…It was impossible with one arm but I tried.

“I think that is one of the keys for me, I don’t know when to give up.” Per-Christian admits his pursuit of racing bikes seems crazy to an outsider but he says that life is complicated and he needed to test himself in this way. Others may not understand but racing bikes is part of who he is today. He is acutely aware of the damage his injuries caused him and that he was fortunate to survive. He said he understood the fear other families would go through in a similar situation of serious injury. His advice could be valuable.

“It’s dark outside right now but it will be light again, it’s always darkest before the light,” he explains.

“So just hang in there, you have to accept that you will have crappy days, and you’re allowed to have crappy days, you’re not a robot. I have a lot of pain occasionally in my arm, but that’s life, that’s my life but it is much easier to suck it up on those days when you know that on Saturday I go out to compete in golf. So I say to myself, you better get well!”

He believes other EDGA golfers would agree with the restorative power of this sport.

“Just the fact that you are able to inspire someone, to do the same thing we are doing, all of us love it, and one key factor I think is all of us have had some difficulties or sickness, so when it comes to golf you can be quite relaxed because you are already a winner; you are able to do this, [to play golf].”

And Per-Christian knows that he has inspired two players recently, one being a woman who had a similar disability to his friend Magnus, and they have now trained and been coached together. Then, a young man who uses a wheelchair saw Christian playing and has decided to give the game a real go.

“He has started playing just because he saw this guy with one arm,” says Per-Christian, and now his joking kicks in….“Obviously playing quite well since I drive the ball 300 metres and I have never done a three-putt in my career!”

There may well be the odd urban legend about Per-Christian, but the reality is here is an intelligent and sensitive man who wants other people to experience the joy that golf has given him. It may not have the thrills and spills of motorbike racing, but at least today on the course Pekka does get to hear the birds sing in the trees around him. If you see him on the tee this season, say hello; he is a man worth talking to.