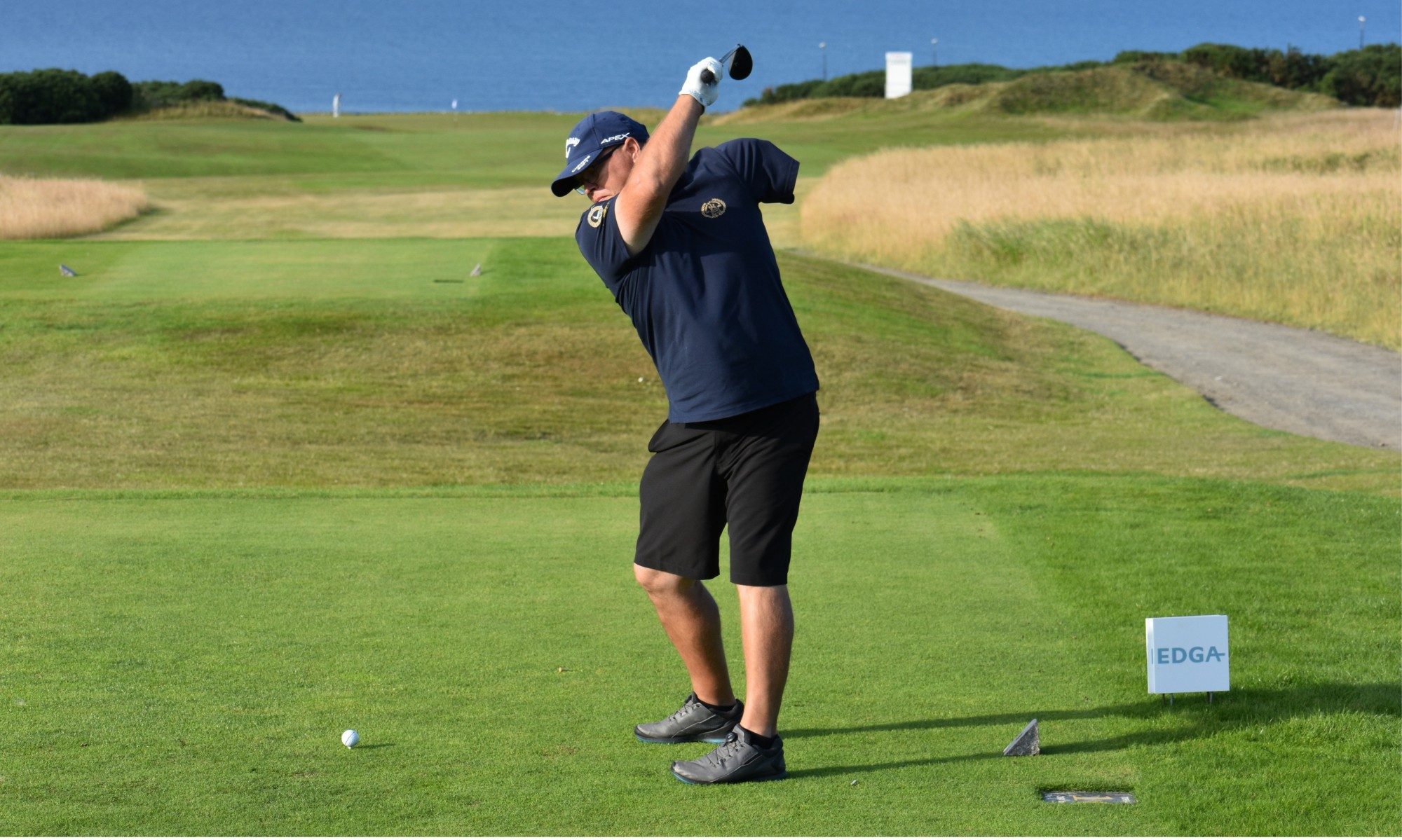 “I also lost some of my friends at the time, perhaps because they just didn’t know how to react to me.“ Around 25 years ago, before Petri Takkunen had ever picked up a golf club, he lost his left arm in a car accident. It happened in the early afternoon on a road in Linköping in Sweden in 1996, when Petri lost control of the car and smashed into a drain. He doesn’t remember much more of the accident, but he knows he was in a coma for five days. When Petri came around he had multiple injuries. The damage to his head left him with epilepsy, along with the loss of his arm.

Every aspect of life changed for the young man from Finland; he was 25 when he crashed the car. Petri was an electrical engineer in the army at the time and it curtailed his career; he would be forced to give up his job. It also effected his recreation, all of the sports he played.

Petri said: “I also lost some of my friends at the time, perhaps because they just didn’t know how to react to me. I had to spend a lot of time at home, relearning how to do so many things differently from what I’d ever known before. It was a steep learning curve, but I never gave up.”

Petri played many sports before the accident, from Thai boxing, ice hockey and tennis to shooting, but golf had never been on his radar. He didn’t think of trying golf until about four years after the accident, and as is often the case in difficult times, a friend’s advice helped him reach the decision, the thinking being that golf might suit Petri’s desire for exercise and focus and could possibly be played one-handed.

Petri said: “I started to play golf in 2000, and so I never actually played golf two-handed in my life. I played a lot of ball games, ice hockey, badminton, tennis – so I was curious. I have a friend who is a golf professional and he said I should give it a try. He had seen other people with a disability play it, and so I went to try it early one morning, nobody being there, and it looked to be not so difficult, and so I started.”

Petri began by working on the fundamentals, with one arm, and he learned about the EDGA tournaments on offer for players with disability. He was one of the first players to acquire an EDGA pass for competition play in around 2001. When we interviewed Petri in August, 2021, he was in the top-20 of the World Ranking for Golfers with Disability (WR4GD), having played well regularly in tournaments off a 4.4 handicap with his right arm. To get there it had not been easy. Petri said: “In 1996, I had the car accident, and I lost my left arm, broke my neck, my skull and my chest was damaged and my right arm also. It was a very difficult time because it caused me to have epilepsy because of the head damage. And actually, after that bad time, then I started to play golf because I just wanted to do something. The doctors said that I couldn’t go to work anymore, they put me on a pension and so 24 hours per day without work or a hobby is too much. I had to do something, and I always liked sports.”

Before trying golf, or any sport again, survival had been the first hurdle for Petri to clear.

“I was in intensive care, I think for two weeks. I was in a coma for five days because of the damage to my head, but I recovered very well. They flew me back to Finland, and I was only one week in the hospital there.

“Of course, it’s difficult. I don’t remember exactly what I thought, but what can I say? If you want to go forward, you have to do it.”

Petri is naturally right-handed and so he still had his ‘stronger arm’ so to speak, though that may have seemed a scant consolation at first.

“I think it helped a little bit, but my right hand was badly broken also. For three months I couldn’t use it, so the start was very, very difficult and also the head damage I have was a big thing. They started the epilepsy medication, and for a few years it was very difficult.

“You have to think about it, of course, about how to survive and how to learn to live in a new way. But the thinking about how you will live changes a lot.”

Petri will tell you that golf has played a significant part in his life at different times over the last 20 years, from giving him that focus, to finding friends in a positive place.

In terms of learning the game, he actually started playing with his right arm in the forehand position in a typical right-handed swing, and he did that for about three years. He was playing quite well, but when he practised a lot in the winter, he realised it felt better when he switched to what he calls ‘backhand’, using left-handed clubs with his right arm, and that is how he plays today.

Petri says: “It has not been an easy journey. Although I had lost my left arm in the accident, my right arm had been broken, and it led to a lot of problems and pain in my arm and shoulder. It became too much for golf, and I stopped playing from 2005 to 2013, and needed to have operations on my shoulder. I decided to try again in 2013, and I really dedicated my time to it. You need a lot of focus to practise to get better, which is something I like about golf, so I put in a lot of work. Once I did that I really improved quickly and reached a single figure handicap quite easily.” In 2021, Petri was delighted to qualify to play in two EDGA tournaments that were being staged by the European Tour, at the same venues and weekends as the Tour events that we watch live on television. Petri’s high position (in the top 20) in the World Ranking earned him his place in these events, an experience which came with media interviews and his own blog on the European Tour website. Most importantly, he was teeing it up as one of eight EDGA players with disability in first the EDGA Hero Open at Fairmont St Andrews (August 7-8) and secondly in the EDGA Cazoo Classic at the London Golf Club (August 14-15).

He was keen to mention that his experiences in these two tournaments meant a great deal after all the hard work he has gone through, and he thoroughly enjoyed mixing with other players with the same and other disabilities. He played for the first time with Masato Koyamada who comes from Japan (he is another one-armed player) and the two men compared their games. But the real thrill was to be around the European Tour players for two weeks, and watch how they prepare, how they work and practise with such intensity. This has inspired Petri for the future.

“When I first started there was no one to help me, but now I realise that I need to get a few people who can guide me. I have an athlete’s mentality and am not afraid of hard work, and so if I can work on the right things then it will be better for me.”

So, how do you learn to play golf with one arm, or play other sports? When we think of this do we take into consideration how much an arm actually weighs, and how being without it will not only affect technique and strength in shotmaking but also fundamental balance, stress on the spine and core strength?

“Yes, that is the main problem,” Petri will tell you. “I want to train every day, but I cannot do it because I have to be aware of both sides of my body, working the muscles and stretching in the right way. I cannot train every day. You can try to hit it 200 metres with one arm, but you have to create the power to do this. It is very hard work.”

Swinging the club is one issue, but not being able to employ two hands to the shot causes significant issues in cutting through grass to strike the ball cleanly, and long or wet grass can still be a scorecard wrecker for Petri.

“Long grass, that is the pain in the neck for me. When you want to hit a long shot and if you have grass six or eight centimetres in height, the club cannot go through, and I don’t have the power, the wrist and something is stuck. And then usually it’s opened also. I don’t want it like this because I want to go for maximum distance.”

Petri explains that he is highly competitive in one sense, always trying to improve, but there is no doubt that the social side is also important.

“The sense of community in golf, and in golf for the disabled, has been a very important thing. I like golf because it’s challenging, and you have to really think about and execute every shot with precision. But the social side of playing with other people is also a great thing about golf, as we often don’t know who we will play with but we share the same game.”

Petri says that with golf for those with a disability, there are opportunities for golfers to meet together in Finland and in other countries, and there is a good sense of community amongst the players. He describes it as being like a family.

“It’s a huge goal for all of us to be able to get even more people involved in the sport as I know there are many people with many disabilities that could play and really benefit from enjoying the game.”

We asked Petri what he might say to others, someone who had just lost a limb in an accident or who were going through another issue around disability and were looking for encouragement.

“If I had to give advice to anyone in my position, it would be that you must never give up,” Petri says.

“I’m not sure when I lost my arm if I thought I’d ever be able to do any of these things, but I was never afraid of trying. And of course there are many things that I have to do differently, but my best advice is to try to live the life you want, and even though it may be hard, you must not give up on finding a way to the things that are important to you.”

Petri Takkunen never gave up. Twenty-Five years after crashing his car, he was teeing it up watched by spectators at the London Golf Club. They saw for themselves how well a person can play with one arm, a sight to make others think about just what might be possible for them.