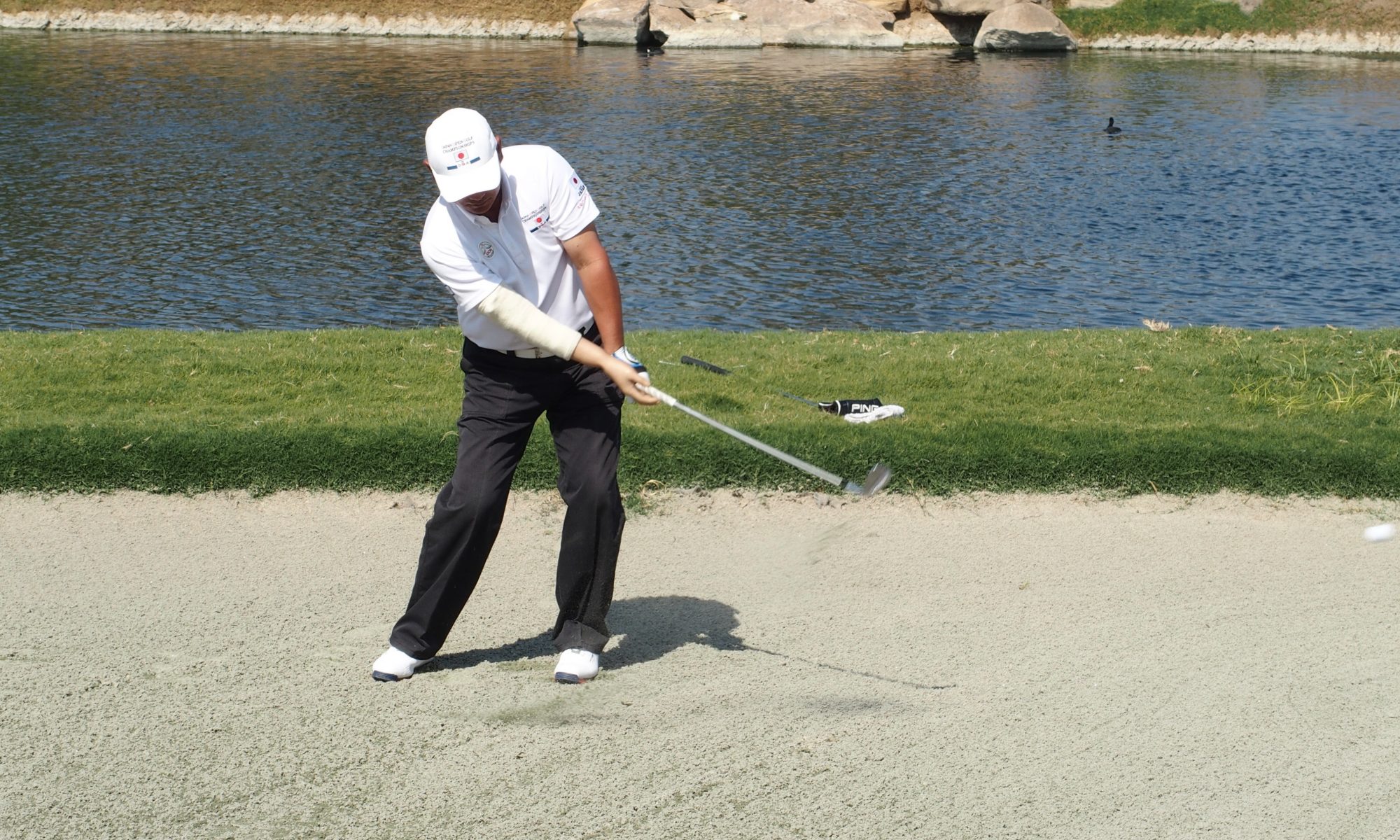 “I feel golf is a sport that helps us learn to respond to various situations, not only playing the game but also in our daily lives.”

Listen to the story Masato Koyamada who was talking with EDGA’s Tony Bennett.

Japanese novelist Haruki Murakami is an accomplished long-distance runner, who wrote a memoir called ‘What I Talk About When I Talk About Running’, published in 2007.

This love letter to the distance of the ‘marathon’ deserves the mysterious title (he actually borrowed and subtly changed it from the heading on a Raymond Carver short story) because it is as much about life, travel, baseball and beer – and the before and after of running – as it is about the actual act of running those 26.2 miles.

We are able to borrow and tweak the title just once more perhaps to tap into the psyche of his fellow countryman, golfer Masato Koyamada. For in Masato’s case ‘What he talks about when he talks about golf’, is also open to a couple of interpretations. In one way, on the subject of golf, here is a guy who took up the game playing with one arm (his left) and yet became a scratch golfer (zero handicap), who was good enough to turn professional in 2013 and start coaching others a year later. His impairment and his level of skill naturally makes him particularly interested to talk about the technique of hitting a golf ball. He will be pleased to engage you in course management, his thinking on a one-armed player’s grip, spin rates, trajectory and how his physical resources affect how he strikes a golf ball.

However, Masato clearly also talks about golf in a different way, linking his experience and love for the game with the love and respect for his family, including his parents (father Masao and mother Satoko) who helped him find confidence after he lost his right arm as a two-year-old, his father for guiding him into golf and encouraging him to improve, and also his PGA coaching mentor, a leading Japanese tour player who inspired Masato to reach for the top.

And like most of us, his life is partly reflected through his golf – Masato is no stranger to the slings and arrows of outrageous fortune. He has endured three life-threatening illnesses: two affecting his brain (including cancer), the other his heart. At the age of 38, he was diagnosed with a brain tumour and after surgery his desire to achieve something meaningful through golf was accelerated; most poignantly so he could create a special memory for his daughter, Maki.

Thirty-six years earlier in 1969, the first of these arrows came out of a clear blue sky, when the happy and curious little boy Masato reached out with his hand at the wrong moment.

“My father and mother were great parents, and I grew up in a loving family. I was only two years-old when the accident happened. My father and mother worked in the meat processing industry. They were working away from our home at the time, and because I was young, they always took me to their workplace. I must have been near the machine that makes minced-meat and accidentally put my right hand in the front of the machine and lost that hand.”

We can only begin to imagine the trauma that the accident must have caused young Masato who fortunately survived, but also his poor parents who would no doubt have been in shock, devastated with feelings of guilt, and forced to confront a huge immediate challenge in protecting Masato and ensuring he received all the right treatment. But as Masato says, there was a lot of love in the family and this helped them all get through this dark time.

“The accident happened when I was so young, so I don’t have any memory of ever having a right hand. However, it seems that they gave me an operation to shape my right arm so that I could easily put on an artificial arm after the accident. Because I was one of four siblings, my parents did not treat me specially. They raised me the same as my brother and sisters and so I was never made to feel different, and that was so important.”

This loving background must have planted a seed which has led Masato to want to support others, first in the city job he started in his home region of Tochigi (150km north of Tokyo) and then later as a golf coach.

“I wanted to help those with physical disabilities similar to mine, so as I grew up I was thinking of becoming a welfare worker; this seemed like a good and healthy idea for me.”

After graduating from high school, he started working as a welfare staff member at the Tochigi Prefectural Office, working for the city government to do public good, a solid career that gave him personal satisfaction. However, having been naturally ‘sporty’ as a boy, by his early twenties golf was taking up more and more of his time, for good reason. “I grew up at a rural school, so I was able to belong to many sports clubs. I used to play baseball in the summer, soccer in the winter, and track and field all year round. I often played baseball at a nearby park with my close friends, and we would use special rules so that even a small number of people could play and have a good game. It was my father who got me started in golf, he loved the game, and he was my role model. He always had a golf club at home, so I could swing his club whenever I wanted. The first time I went to the golf course was in my third year of junior high school, I was 15 years old. I didn’t have my own golf clubs yet and borrowed my father’s and went to play with my brother and uncle. My nine hole scores were 52, 48 and 44, and I remember having a lot of fun.”

“My father taught me that the first thing to learn in golf was not skill but manners, so I played desperately so as not to bother other people. After that, when I started thinking about my actual scores, I started to find it more difficult to play golf!”

Masato started playing golf seriously after high school from about the age of 19 and improved quickly, encouraged by his father Masao, winning several club championships in these early years. Over the years that followed he kept improving, and his golf handicap came tumbling down to ‘scratch’ (zero) by the time he was 40.

“At the beginning, I golfed only with friends, but when I started playing in tournaments, I was introduced to people who were competing to reach the top level, and I became a member of the same golf course and started to play with them. I tried to watch and learn techniques instead of having them taught. I found it good to then share technique and learning with other players. In our Japan Disabled Golf Association events, I always try to share my playing ideas with the other players. When I first became a club champion, or when I achieved a handicap of zero, I was always thinking about how to play golf without having a bogey. Now I am always thinking about how to get a birdie. Considering course management carefully, I focus on the holes that I can play aggressively, and the holes where I should be playing more conservatively.”

Among the titles Masato has won are the Japan Open Golf Championship for the Disabled (twice, in 2013 and 2016). In 2009 he was particularly proud to finish runner-up in the Tochigi Amateur Golf Championship, competed in by leading players from all over the region. Masato’s life might well have been quietly played out working in government offices and at weekends competing on the fairways had it not been for some medical tests he underwent in 2005 when he was 38, which revealed that he had a brain tumour. Surgery was needed and was successful, and this lit the fire in Masato to follow the dream to reach his full golfing potential. Inspired and supported by his friend and mentor, the PGA coach Mamoru Takahashi (who as a player won twice on the professional Japan Golf Tour), Masato would work many long hours to eventually qualify as a Japan PGA professional coach in 2013. A huge achievement for the lad who grew up with one arm rather than two.

“Now, when I teach others to play, I love to be able to help students who at first might find the game difficult, and working with them, see them improve. It is a wonderful thing to see smiles on their faces when this happens, it is very satisfying for me as their coach.”

Masato still has serious playing ambitions, including breaking into the top-10 in the World Ranking for Golfers with Disability (WR4GD). He is currently ranked number 21.

And today, Masato still loves to talk about technique. He is good at explaining how playing with a left arm, the amount of spin on his golf ball is less than for a similar two-handed player, his drives go lower and stopping the ball on greens with irons can be more challenging, so he has to work around this issue. Or, how the shoulder turn can be compromised swinging with one arm, so he needed to find his own adaptation to turn well. He will tell you how he’d like to see the Rules of Golf change around the ban on anchoring longer putters for one-armed players.

But while he enjoys talking technique he is as happy to stress how the game has helped him to feel good as a person. “I think golf is the only sport that you can enjoy playing with others regardless of age, gender, or physical disability. Golf is a sport in which you control the ball, so if you want to work hard and become a stronger player, you are able to do so without anyone’s help. You can also support those who need help while playing. Additionally, I feel golf is a sport that helps us learn to respond to various situations, not only playing the game but also in our daily lives. I have had life-threatening illnesses in addition to losing my right hand, but I can play golf even with this physical condition. Golf is something that helps me overcome the hardships and setbacks caused by the many obstacles of life. It is also a way to compete with the world. And I’ve had the opportunity of meeting many good people because I’ve had golf in my life.”

Masato Koyamada is clearly a thoughtful man. So, ‘What he talks about when he talks about golf’ isn’t just about technique, how to hit a ball. It’s about life, and nothing is more striking than what he says about why he chose to train to be a PGA professional. In his words, “I wanted to leave a father’s living proof to my daughter.”

It’s a simple sentence that suggests why we look to achieve things in life and the importance of love in a family. Perhaps it could even become a title for a story which a famous writer like Haruki Murakami might like to borrow?