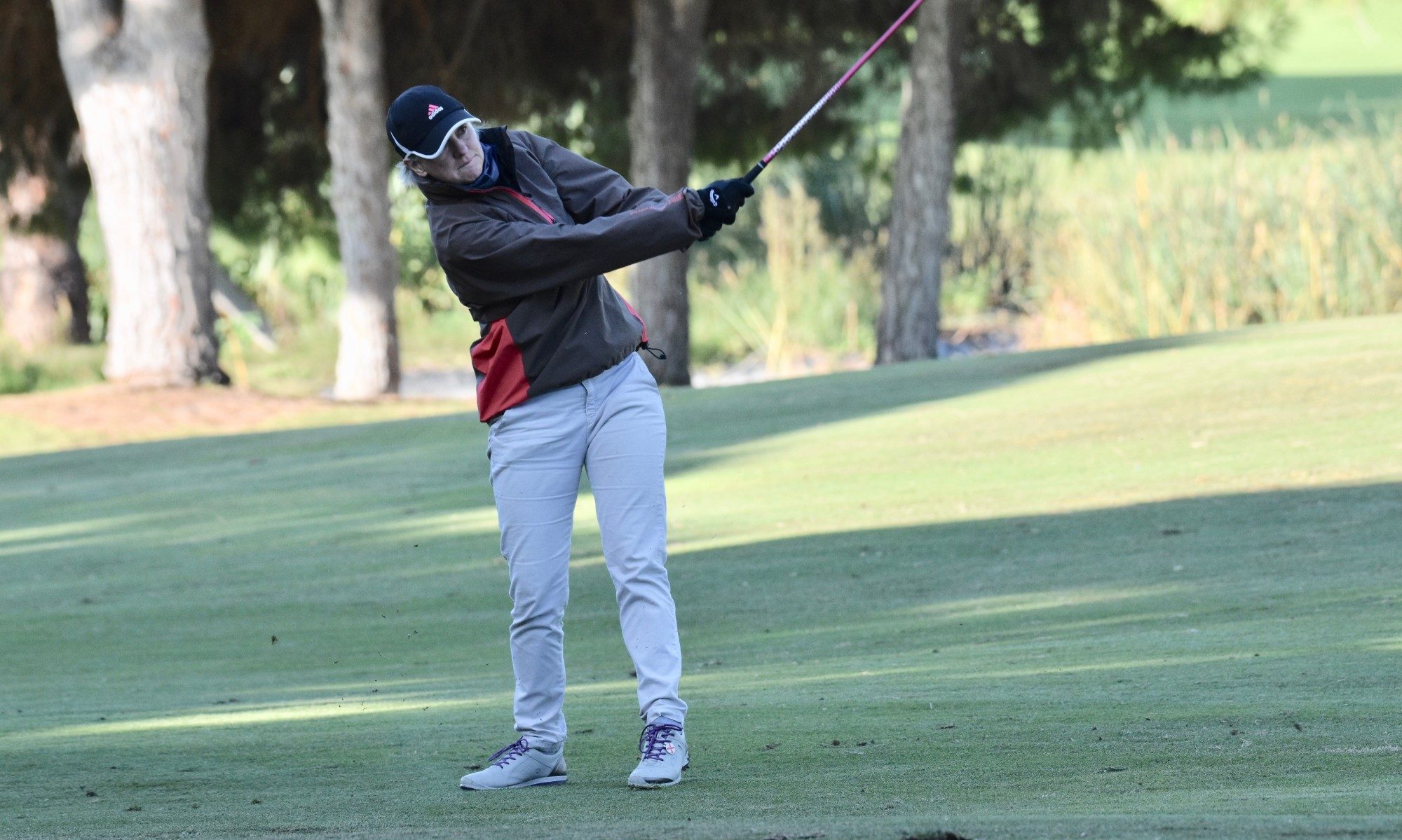 “I literally phoned my boss from the hospital and told him that I was having a brain scan, but would be back to work in a few days. I was blissfully unaware.” “Crikey, he’s trying to sell me something here, I’m being taken for a ride.” These were the thoughts of former amateur jockey Nicky Weeks. In fact, Nicky’s suspicion was raised simply as a result of the encouragement she was receiving from a golf professional during her first golf lesson, almost 25 years ago.

An accountant by qualification Nicky, from Guildford in the south of England, has an invisible disability and has lived with Multiple Sclerosis for some 14 years. Back then, her experience with Alan, the golf professional at Windlesham Golf Club was in part the result of her realisation that perhaps something a bit tamer than hanging onto a horse travelling at 40 miles an hour, and with the potential of falling off and hurting herself badly, might be a good idea.

“A friend of mine, Sharon whose partner was a professional golf caddy, suggested that I give golf a go, and recommended that I had a lesson before doing anything else. So I went and remember Alan getting quite excited. I was thinking, what is he excited about?” Nicky had always had an interest in sport and physical fitness. Following school, she had played hockey, and of course, she needed plenty of strength and power to control her horse as it sped across the turf. So it is no surprise that the then 27-year-old had enough physical literacy to be able to swing the club and make a decent enough contact with the ball. “I’m not saying I’m a great golfer by any stretch, but I think I’d made a good beginner. I think that the professional saw in me the ability to go on, to improve, and not just stay static. He was a really big influence on me starting to play golf. Every time I walked away from the lesson, I felt really buoyed and quite happy with how I was progressing.” Nicky played for a few years and managed to squeeze the game into her busy schedule, playing here and there when time allowed.

Nicky, who had been studying for her final examinations to become a qualified accountant, unexpectedly started to feel changes in her body. “My arm was really aching, but I thought that was because it was on a day when I had been writing a lot. Then over the weekend, my face went numb, my leg went numb, my whole arm was numb. It basically affected the whole of the right side of my body, and I was not really with it either so I wasn’t really aware of what was going on. I thought that perhaps it was a stroke.” Soon she was in the hospital where the doctors arranged a brain scan to get a better understanding of the causes. The results came back and showed some scarring on the brain. An MRI was organised, which revealed MS-type scarring. “They couldn’t diagnose me fully because MS is that you have to have multiple scarring to be diagnosed. So it took another three years to get the complete confirmation, which is typical for an MS diagnosis.”

During the first visit to the hospital and without knowing the full extent of the scan and subsequent MRI, the physically active Nicky who had never been ill before, simply assumed that she would brush it off and get back on with her life. “I literally phoned my boss from the hospital and told him that I was having a brain scan, but would be back to work in a few days. I was blissfully unaware.” It was only when speaking to the neurologist that Nicky and her husband Chris started to realise the magnitude of what had just come to the surface. “He said that I might take a year to get better, and even then, I might not get back to what I might consider better. That was the first time that I think it struck both of us, just how huge it was.”

The days and weeks came and went, the ebb and flow of life, and every week, Nicky thought that she was indeed getting better, “I thought, I’m better, then I thought, no, perhaps next week. It took about six months before I had a day where I was feeling OK to go out and do something other than just make it to the end of the garden and back without being exhausted.”

Nicky feels her general fitness enabled her to deal with the challenges that MS has thrown at her. “Because of always being involved in sport, and keeping myself fit, I wouldn’t say I have recovered quicker, but the recovery was easier. I had the muscle tone, and I wasn’t carrying any extra weight. I was able to do the physiotherapy that they were giving me.”

One of the challenges with her invisible disability is that people can be forgiven for thinking that there is nothing ailing Nicky. “Look at me, and you wouldn’t think there was anything wrong with me. That’s one of the big things with MS, everybody looks different. It’s very easy to see someone in secondary progressive MS, where they’re in a wheelchair, and you can see their symptoms. But with me, it’s slightly different.” Managing fatigue, heat, cognitive load, medication, stress, and deploying coping strategies to deal with each symptom of the condition requires careful planning and an understanding family. “I have to really consider every day but plan in advance if I’m doing something big on a particular day. The cognitive problems are that I’m extremely forgetful. I do brain training exercises on an app and have seen a speech therapist, because if I’m really tired, then my speech just goes to pot. I struggle to find the words, and even make up words sometimes, which is quite amusing for the rest of my family. You do have to laugh at certain things. I eat well, I do keep myself fit, and I do train through these brain training exercises.” Golf is back in Nicky’s life, and this time it’s different. Now a member of Camberley Heath golf club and playing in both regular and golf for the disabled events, Nicky is enjoying the game that she first learned pre-MS. Most people are more comfortable when they know what to expect. Even though Nicky had the experience of regular tournaments, her first tournament on the EDGA calendar was revealing. “Before I went, I was expecting a big event, which it really was from the welcome, the reception, and being announced on the tee. Everything felt like a big event, the buzz was there. I was expecting that, but what I wasn’t expecting was the warmth from everybody. That was the one thing that I’ve come away with, feeling part of a community rather than competing against other people with a whole range of disabilities. So that really struck me. It was that genuine warmth and everyone talked with me. It was really quite uplifting and gave me quite a buzz.”

Nicky is quick to advise others who are considering giving golf a try to simply go for it. “There’s nothing to lose and everything to gain. If you want to have a challenge, or if you want to meet people, or if you want to just get some fresh air, golf ticks all the boxes. It’s a huge experience and really gives you that self-confidence and achievement that I think makes a positive difference in anybody’s life, whatever they’re facing.” Nicky also recognises the importance of developing a strong support network, a place that she can turn to when in need. Supportive family and friends have come together with a professional network which she has developed into a helpline for life’s twists and turns. “If you have a nurse, doctor or consultant that you can pickup the phone to and say, I’m in a desperate situation, I just don’t know what to do, I don’t know how to cope, it is fantastic. I’ve been very fortunate to have been assigned an MS nurse, who I’m able to talk with. She then directs me to occupational therapists who specialise in this or that particular problem. Accepting the help that’s there is a really big, big win.”

Of the many lessons that Nicky has learned, her reflections on riding a horse strike a parallel with life. “The horse has a brain of its own, it moves on its own, but you are supposedly in control of it.” Just like life, which in itself is a continually changing ride as it moves this way or that, we never really know what is around the corner. Sometimes we must go with the flow, find a way to cope with current circumstances, or perhaps simply just hang on.