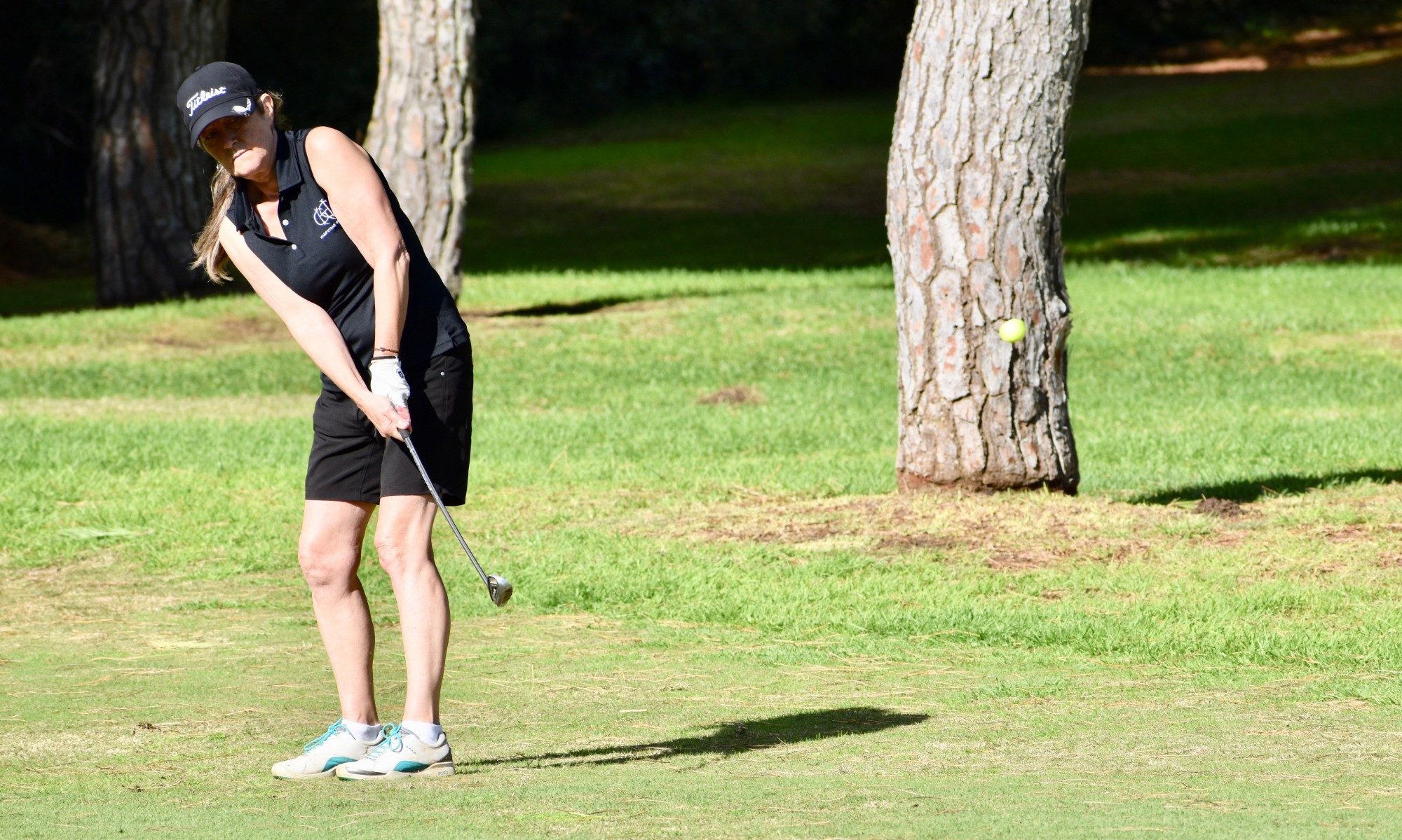 “If you’re working, you’ve got young children and running a home, you can be tired. I don’t want to say it is because of MS that I am tired. I try to think the other way and just say, I’m tired.” With two generations of golfers already in the family, it would be natural for young Gail Owen nee Young to pick up a club and join them on the Hampstead Golf Course on the north side of London. Right?

Well, let’s not jump to conclusions. Gail did pick up a club, but with no real intent and it was only when a friend bought her some golf lessons for her 40th birthday that she started to play. So why did golf fail to hook Gail into a game that was a cornerstone of the family? “I used to get pocket money when we were away on holiday in Norfolk for caddying but ended up just walking around with my grandad Philip from the Griston side of the family, my uncle Geoff. Then my mum Margaret started.” Not only were her parents’ members of the nine hole club, but Ken and Margaret became captains together in 1979 and 1980. Ken would later become the secretary of the club for six years until his retirement. “Our families played loads of sports, but there weren’t really girls who played and golf didn’t really appeal to my sister Sara at the time. It was more boys. If there had been another girl who played, I would have probably tried.”

Fast forward to 1996, the year of the 40th birthday present that would kindle a slow but smoldering start in the game. Gail had a few lessons with the professional at Hampstead, Peter Brown, who laid down some of the fundamentals, but even then, Gail didn’t get bitten by the game and didn’t really play very much, “I could hit the ball … I’ve always played sports, and I’m quite competitive. I’m quite stubborn, so yeah, I just sort of gave it a go and did my best.” Life was changing for Gail. With a background in bookkeeping and a father who had been brought out of retirement, Gail was persuaded to do a couple of days a week at the club to help out. The previous secretary had put all the accounts onto computer recalls Gail, “My dad does accounts, but he does not do computers. I’d been made redundant, and I’d found myself two other jobs, but then he phoned me and said, ‘Gail, do you fancy working at the golf club a couple of days a week?’ It’s now gone from two days to three, to four, and now five days and 23 years later I’m still there!” Today Gail is full-time in the assistant secretary role and gets involved in the accounts, handicaps and competitions, membership, and anything else that comes into the office.

Golf was now very much part of Gail’s life, and even though she was surrounded by the beautiful nature and tranquil environment, getting out to play a few holes was still not a great attraction. That was until her youngest son Tom wanted to try golf, “We live near North Middlesex Golf Club and so joined there. He started to play, and he enjoyed it. It’s a great game for juniors, and we haven’t looked back really.” Finally, a spark that would ignite Gail’s passion for golf was lit. From time to time mum Margaret, Gail and Tom would take to the course, which is part of the power of golf; after all, there are not too many sports where three generations can play together. The year is now 2000, and it was like any other day at the club. Gail was hard at work in the office and had cause to speak with someone in the professional’s shop. She would make this walk hundreds if not thousands of times over the years, but on this occasion something was wrong. “I walked over to the pro shop to do something, and although I didn’t know it at the time, I had double vision, and it felt like the two halves of my head were different sizes.” The optician referred her to the hospital eye clinic where she had a CT scan and MRI, “I noticed that if I wanted to move my leg there was a delay.” Gail is not one to dwell on things and in time, the vision and leg got better. “I just didn’t think about it really, and then when I went to see the neurologist to get my results, I even went on my own because I thought nothing’s wrong, and she just said, ‘Well, you know what you’ve got, don’t you?’ I said no.” Today doctors can be pretty forthright, and when Gail received the words, “Well you’ve got multiple sclerosis,” from the consultant, there was little by the way of sugar coating. The words, although direct, came slowly but hit hard, “All I knew was a wheelchair scenario. I didn’t know anything more, so it was a little scary, to say the least. The kids were thirteen and eleven, and you just don’t know what is going to happen.” Gail has relapsing and remitting MS, which she says is the best one you can have. She understands her body and the telltale signs when she is pushing it too hard. “My symptoms range from tingling in my arms and hands, occasional balance problems, days when my head just feels ‘off kilter’, and on the occasions when I pushed myself too hard, I experienced l’hermitte syndrome, which felt like electric shocks in my legs especially when I tilted my head forward.” The human ‘I quit’ button is sometimes pressed a little early but not by Gail, who occasionally feels tired, “If you’re working, you’ve got young children and running a home, you can be tired. I don’t want to say it is because of MS that I am tired. I try to think the other way and just say, I’m tired. “The neurologist says if I have tingling down my arms or in my hands, and if it lasts for more than 24 hours, then count it as a relapse. In 2003 or 2004, I had something going on in my head. I don’t know what it was, but it just did not feel right, and they said, ‘Go to the doctor if you have something which lasts more than a day.’ I left it for about five days, as you do, thinking, ‘I’ll be better tomorrow,’ and then I went to the doctor and they referred me. It took seven months to get an appointment! I thought then, I’m just going to try and look after myself as much as I can and just do what I can, and listen to my body, and that’s kind of what I do.” Look after herself she does. Regular golf and dancing are both a source of great fun, and Gail enjoys the friendships that she has developed through both.

Gail listens intently to her body, and does not take medication, although she knows that had she been diagnosed today she would likely be on a protocol of prescribed drugs, “I have a new neurologist for the last two years, and she asked me about medication, and I said, I would prefer not to be on medication, because I feel that sometimes the side effects just cause other problems and it might mask something that otherwise is important.”

Gail’s introduction to golf for the disabled was unusual, to say the least. Gail had been playing with her partner for the day, Kirsty, who was chatting away when she mentioned that her long-time friend also played golf and that she had MS. “I said, I’ve got MS, and she went, ‘Great!’ That’s just not the reaction I usually get.” Before the round was finished, the ever-positive Kirsty had encouraged Gail to play in her first event for disabled golfers. The experience of the tournament left a lasting impression, “Everyone is so friendly. They are just incredible human beings who’ve overcome some things you can see and some things you can’t. Some of them have come over huge barriers and are so mentally strong. All you can do is admire them, they are fantastic.”

Gail is just back from being the leading golfer with disability in a demonstration event that took place at the Rose Series tournament for women professionals and leading amateurs at the Shire in July. She is living proof that an unexpected diagnosis that could quickly dampen even the most white-hot fire is manageable. She understands that everyone’s journey with MS is different but thinks that attitude and outlook are critical, “Take a deep breath. It takes a while to process because you don’t know what the future is going to bring. You have to give yourself time to just take the information in. Only look at certain websites such as the MS Society, because there’s so much information you can look at. There are also local MS societies, where they have groups which you can join. I think the support of other people is invaluable because you can share your experiences. Everybody is different. Everyone will have different symptoms and different severity, and there’s always a way of getting help, you just have to find it.”