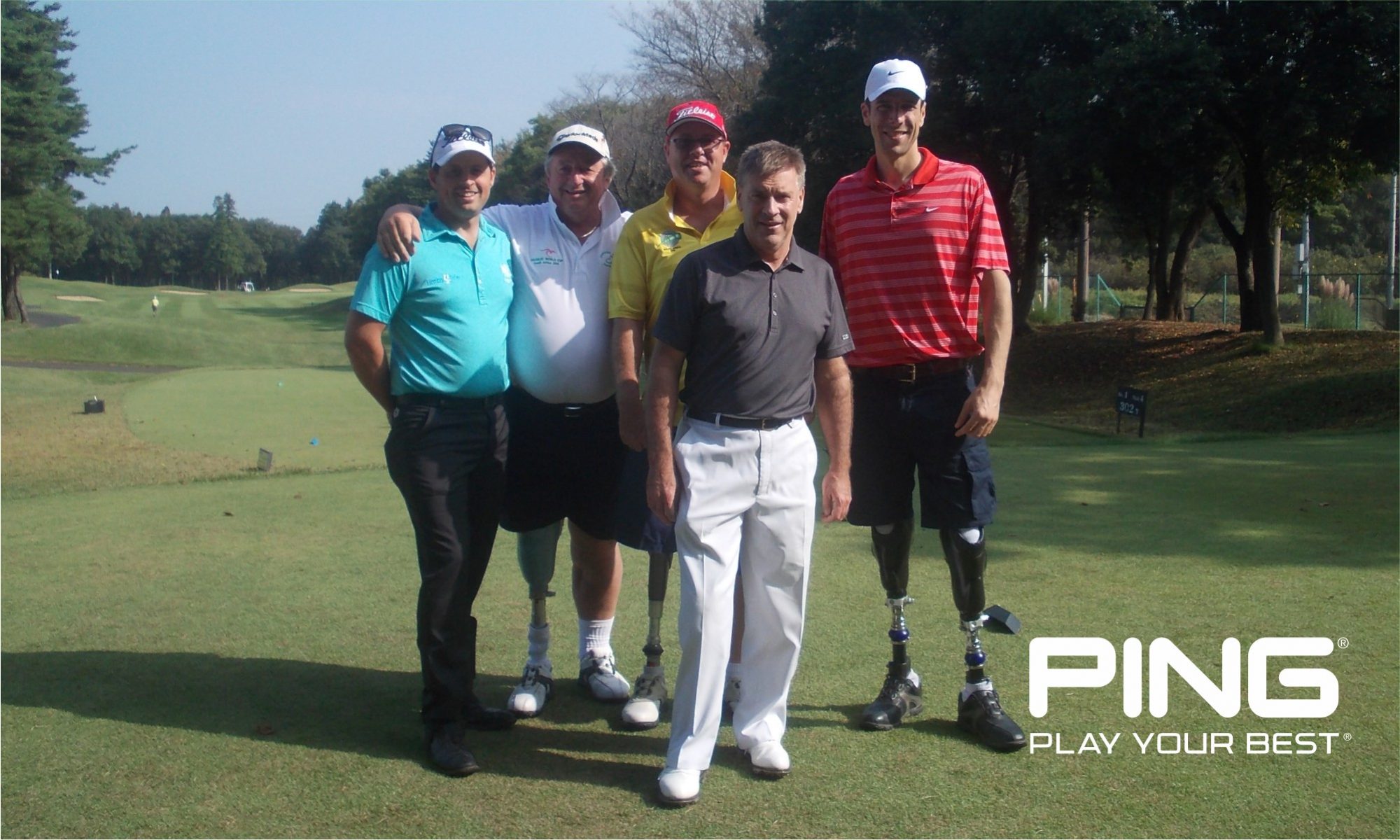 “Geoff Nicholas was an easy target for bullies that were all too common in schools during the sixties and seventies. Imagine, just for a moment, that you were brought up in a sports-mad country. Now consider that you cannot play sport due to a congenital condition that most people cannot even spell never mind understand, and the ingredients are in place for unwanted attention.”

EDGA’s Tony Bennett introduces his interview with Geoff Nicholas, who as a victim of Thalidomide had to overcome the loss of his right leg and the unwanted attention of bullies, to become the dominant force in amputee golf.

Playing sport to an outstanding level seems to be one way to avoid unwanted harassment and persecution from those whose aim is to intimidate others and so avert scrutiny of their own inadequacies. But for Geoff, here lies the seeds of an extraordinary level of success, and recognition as the man to beat for the best part of two decades.

Geoff explains, “I had a form of Thalidomide which affected both legs from the knees down.” Geoff was missing the Fibula, which is one of two bones that give the lower leg its structure. Both of his ankles were missing, but it was the right leg that was causing most concern. “It didn’t grow quite like the left…it was about six inches shorter,” says Geoff, “I got a lot of bullying especially when I was in kinder-garden and the first and second grades when I had to wear special iron shoes. I stood up to [the bullies] as I didn’t like getting pushed around, so in the end…it probably made me a stronger person.”

Born and brought up in Sylvania Waters, a suburb of Sydney, Geoff was a sports fan like almost every other youngster in Australia, but he couldn’t play due to the deformity of his legs. A drug named Thalidomide was used to combat the effects of morning sickness in expectant mothers, little did anyone consider that some of the side-effects would be life-changing as the formation of limbs in the still-developing foetus would be affected. Geoff and his parents Ted and Nancy knew that it would be only a matter of time before his right leg would be amputated. In the meantime, Geoff did as many kids around the world had done before him, he used a wall, a ball and his imagination to be one of the great Australian opening batsmen or Grand Slam tennis players at least for a few minutes. Geoff remembered seeing golf on TV and was inspired to give it a go, for someone with a fertile imagination it was not surprising when he just went out into the street with a stick of wood and bashed the ball with a self-fashioned golf club. These first few swings and hits were just the beginning, and as he progressed he started to go out with his brother Paul and a friend Malcolm. The bug had bitten, and Geoff was now infatuated with golf, “I would have loved to play a team sport, but with golf, I could just go out and practice myself… and that is why its such a great game… you don’t need anyone else to help you along… you just do it yourself.” In the nineteen seventies there was a general belief amongst golfers that to become a good player, one had to ‘dig it out of the ground’, this saying referred to doing thousands of swing repetitions, hitting thousands of balls and practising until one’s hands bled. Even today many golfers have not yet learned to practice smart. Geoff subscribed to this theory and was very dedicated to his game. “Golf in Australia was and is quite cheap, and there were a lot of courses, where we lived, there were four or five courses in five kilometres or so,” recalls Geoff. Golf was also pretty accessible, and there were always lots of kids around that he would play with.

On leaving school, Geoff went to work in the Commonwealth Bank and when not working would spend countless hours honing his long game, developing his short game and fuelling his competitive instincts. Geoff had yearned to join a championship course, and when he reached twenty years of age, his dream came true with an opportunity at The Lakes Golf Course. The chance to play on a challenging layout was a real turning point, although according to Geoff, success did not come quickly, “Even though I was practising a lot …it was a very slow process in getting my handicap down…I was off about nine handicap when I first went there [the Lakes]…and then four or five years later I got down to scratch.” Determination was something that Geoff had in abundance and together with the steely streak that his childhood persecutors had unknowingly developed in him, it meant that once he got his teeth into something he would not let go. So it was a slow but steady evolution of his game. A few lessons on his game with respected PGA coaches such as Gary Edwin and Gary Barter, lots of practice and soon Geoff would represent The Lakes in inter-club matches, and later he would become a valued member of the twelve-strong  New South Wales team. His confidence grew as he met every challenge,  “You are always trying to get your first par round and then when you get it, then you get another goal,” says Geoff.

Geoff played and still plays most of his competitive golf with able-bodied golfers, but he is perhaps best known for his domination of amputee golf during the nineties and early two thousands. Geoff recalls that finding out about golf for the disabled was not so easy back in the day and it was 14 years before he played his first competitive event with other amputee golfers, “There was not the opportunity to find out about disabled events back in those days, pre-internet and pre-google, so I had to write letters to find out about what opportunities there might be.” Geoff entered an event for amputees in 1989, and in 1990 he won the inaugural British Amputee Open following it later in the year with the US Amputee Open. These two wins were just the start of his domination as he won both championships every year until 2002. In 1992 Geoff had become a PGA Tour Player, earning his card to compete with the “big boys” on the Australian Tour. The professionals, of which Geoff was now one, treated him well in that he was just one of the lads, just like everyone else. “A lot of them respected me for what I had done…everyone is out there trying [to win] but they are happy to help someone, which is something that you don’t get in others sports,” he says. The contrast between Tour golf and golf for the disabled could not have been starker for Geoff, “When I played on the PGA [of Australia] Tour, I was actually just satisfied to have qualified, which probably was not a good thing. But when I was playing amputee golf, I knew how Greg Norman would have felt, I turned up, and I didn’t think anyone was going to beat me…I got this real confidence, it’s like you feel like your the king, in a nice way.”

One highlight was beating Tiger Woods in the first round at the 1996 Australian Open, “It was…one of Tigers first tournaments as a professional overseas… he shot a 79, and I shot 76. It was terrible conditions, it was so hard,” laughs Geoff with a wry smile, “I led him by three shots after that first day…we both made the cut, although he beat me at the end of the tournament.”

Golf has been a saviour for Geoff, from the very first moment he picked up a stick to hit a ball, he has felt at home,  “As a kid, I lost my leg…but as soon as I took the game up, I never ever thought about that again. It was incredible because I was out there all those hours and was concentrating, it was not just a physical help, but mentally it was even greater because you learn so much, you are with others, you learn to respect others.” Respect is high on Geoff’s value system, “One thing I really learned is respect for others, you learn peoples characters from being on the golf course.” Geoff’s love for the game is obvious when describing what it means to him, “It’s been so good to me, even up to now.  It helps me and makes me forget [my disability]…there are not many games that you can compete against able-bodied players, it is probably the only sport in the world that you can do that on an equal playing field.”

Today as the proud father of three years old Elizabeth, his appearances on the PGA Senior Tour are somewhat restricted. Never the less he says that his competitive juices are just as healthy today as they were when he first picked-up the winning habit. The life skills he has developed have given Geoff the opportunity to travel the world, share his passion for golf and to help others find the game. Geoff regularly teaches a class for youngsters with intellectual disabilities and has taught groups of returning amputee veterans in the USA. He is thoughtful when asked what advice he might give to someone who has a similar disability to his and says that he would tell them, “It’s going to be tough…you are going to have your ups and downs, just like life. I think for someone with a disability when you go down it is sometimes harder to get back up again… I was lucky in that I had golf, but I think any kind of sport…can really help you, physically and mentally.”

Geoff has experienced a great deal, the lows and the highs, through which he has earned a clear perspective on life, “I always say that there is someone worse off than you, I look at people in wheelchairs and think…my God, how lucky am I? Obviously, I would rather not be [disabled], but it can happen to anyone, you can have an accident, and that’s what happens… your career might be over, but there is still something else out there for you.”  Inspiring words indeed.