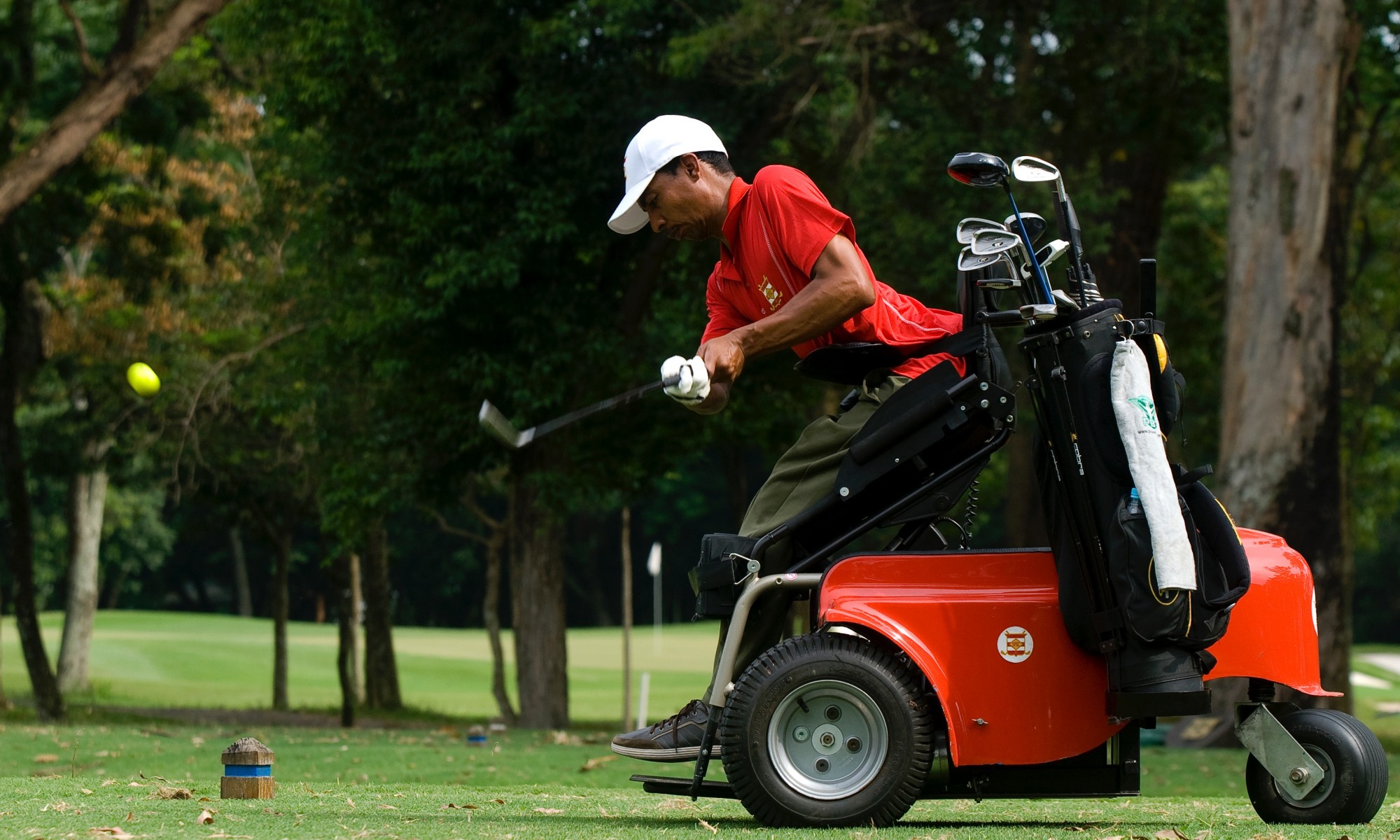 “When I made the first visit to a golf course, I came across nature and felt like a small part of the sky. It was an emotion that made me cry. I am totally in love with the sport.” Gunshots broke the hum of the city as a deadly weapon was fired at Lucas Vale Marciano de Oliveira in an unprovoked attack by two men. Eight bullets lodged into his back and on the floor, the attackers made off with the equivalent of €400, his watch and tennis shoes. Lucas who was merely doing his job as a pizza delivery boy, was just 20 years of age when overnight his life changed forever as he became a paraplegic.

Lucas was born 33 years ago in the north-eastern part of Brasil, before moving south to the busy metropolis of São Paulo where he was raised with four brothers and a sister. His parents Vivaldo and mother Iracy worked hard. Lucas had been dating Kelly for a couple of years and was beginning to make his adult life when the shooting took place. São Paulo has a population of over 12 million people, is one of the top ten largest cities in the World, has the largest economy in South America and at the turn of the century had a homicide rate of 0.05%. Over the last eighteen years there has been a tremendous reduction in homicides, but on that dreadful night in 2005 and in the months and years that followed, Lucas had his faith tested to the limit. “At first I was distraught, but I learned to deal with my disability, and I did not stop fighting for my dreams and did not give up on winning,” he says, and the strength he has gained from the love of his life Kelly is immense, “I have been married for 11 years with my wonderful wife, Kelly Cristina Dos Santos Oliveira, she has supported me since the beginning of my disability, even though we were only dating when the shooting took place. She did not abandon me, and she is still with me to this day.” At first Lucas had to learn how to live again, “everything was new, I became a baby again and had to learn how to do every day things with a different body, and learn how to use a wheelchair,” Lucas says, “your body changes completely, and you have to learn to cope with a new life experience.” These were dark days, which eventually became lighter for Lucas who was determined that even though he couldn’t walk, life would move on. Lucas drew heavily from his faith and realised that he was lucky to live, “to wake up, breathe the air, and enjoy every moment of our lives, whether disabled or not is incredible, we all have problems, but all problems have a solution for us to find. The important thing is that I am alive, have hope in my heart and always having faith that in God everything is possible.”

One day when out with his son Kaique they passed by a golf course. Lucas is a curious man, who likes nature and so thought he would go into the grounds and ask about golf. Fortune shone on Lucas as he met the right person who did not simply turn him away, but instead gave him the telephone number of the São Paulo Golf Federation. Lucas could not wait to get in touch, he made contact and was accepted into their adaptive golf project. These first few steps changed the life of Lucas and golf gave him a sport where the benefits, “are not limited to my physical health, but also my psychological and emotional well-being, the practice of golf helps increase my self-esteem and the quality of my life,”  he says. In the land of football, golf is not a very popular sport. With less than 30,000 golfers in a population of over two hundred million people, golf has the unfair reputation of being for the elite. But golf in its purest form is for everyone. In a city the size of São Paulo, one could be forgiven for thinking that there might be many golf facilities. Sadly this is not the case, and so Lucas makes an eighty minutes journey across town daily to reach the federation’s golf facility. Although he travels by public transport, navigating escalators and poorly maintained pavements, he does so with joy in his heart as it is the signal that golf will be part of his life that day. “When I made the first visit to a golf course, I came across nature and felt like a small part of the sky. It was an emotion that made me cry. I am totally in love with the sport,” says Lucas. Respect for others is something that he recognises in golf, “it is more than getting a club to hit a ball.” Respect for Lucas is growing every day, his coach at the federation is affectionally called Joãozinho, who has been with Lucas every step of the way. Joãozinho is a good-humoured man,  a man of patience, years of experience in teaching new players and with a calm demeanour and was just the right kind of coach for Lucas when he first showed-up. As with most people, Lucas started by hitting balls on the driving range, and surely the heads of other players will have turned when this man arrived at the facility, wheeled himself to a mat and started swinging the golf club while sitting in his chair. Lucas has a fierce determination to become a golf professional, but his head is not filled by visions of grandeur, as he realises the dedication necessary to reach such a level of proficiency will not be easy to achieve. Lucas advises others who may be struggling to come to terms with their disability to, “Never give up fighting for something you want, live every moment of your life, because today we are alive, but we do not know what tomorrow brings. Be dependent on yourself, everything we do is good for us, we are only disabled, we are not poor things, after all, we are all human beings with strength and will.”

With an attitude of gratitude running through his very being, typically Lucas thanks others, “I thank God for my life, and my family for supporting me in the difficult times, and for not abandoning me.” He is thankful to the President of the São Paulo Golf Federation, Antonio Carlos Padula,  for having welcomed him with open arms, “if it had not been for him I would never have known the world of golf.”  I thank my coach Joãozinho for his never-ending support, and I appreciate the support of São Paulo Golf Club’s captain, for having opened the doors to this famous old club for me to enjoy my passion.”