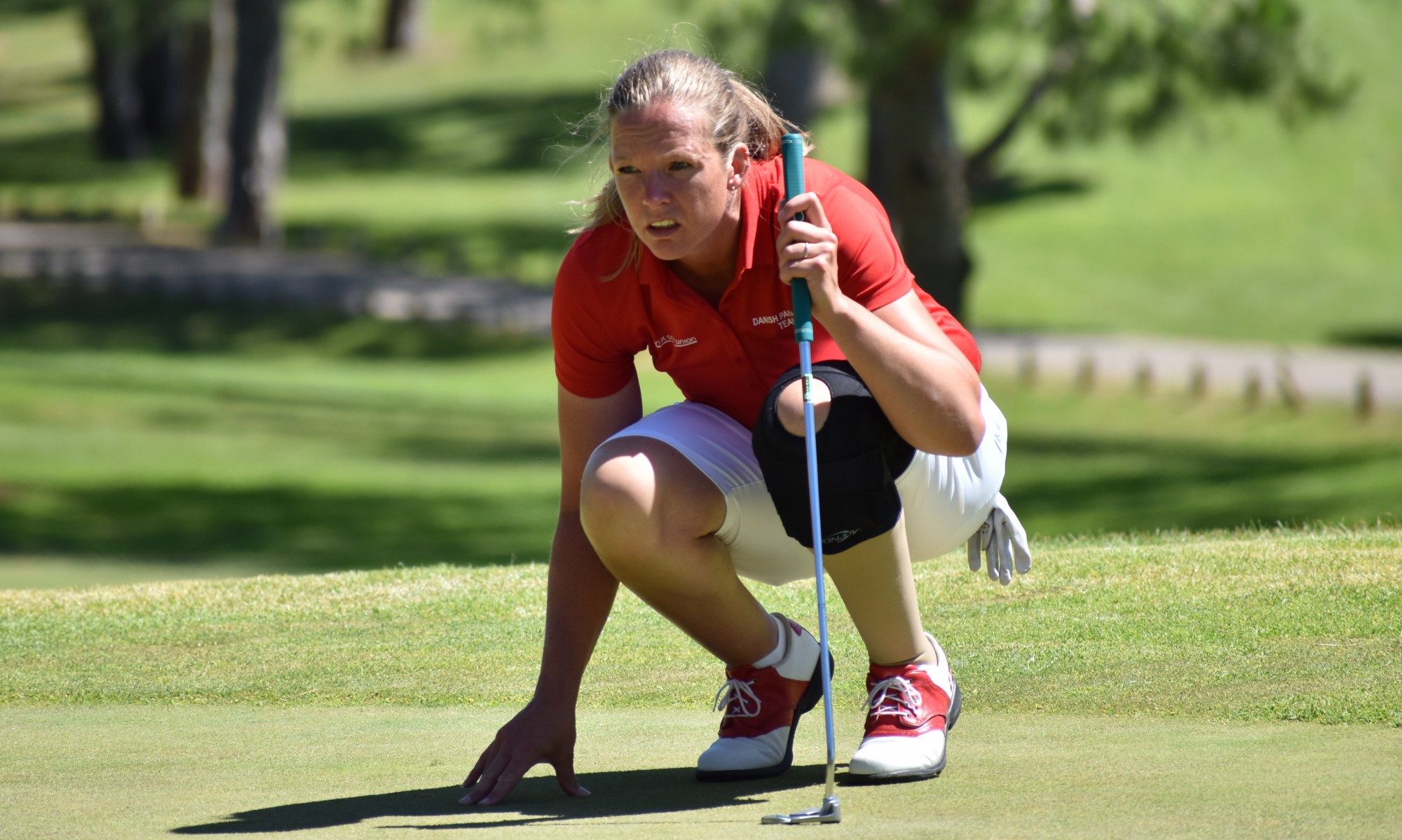 “Do everything you want in life, it may take a little longer, but try.” “If you want you can try, if you cannot do it then you can train to be better, or you can sit down and cry,” so says Louise and Torben, the parents of Mette Wegge Lynggaard. This is the life philosophy that has carried this woman from the largest and most populous island in Denmark, Zealand, to the fairways of the world as a competitor in the Danish para golf team.

The word ‘team’ has a strong connection to Mette who considers herself a team player, even though she has excelled in two disciplines that are often viewed by the general public as individual sports, Mette brings a different outlook, and says “swimming looks like an individual sport, and it is when you get in the water, but there is a whole team around you, with coaches and teammates, golf is similar.” Had it not been for a team we may never have seen Mette competing in the European Championships, for it was a conversation at her home club Skjoldenæsholm Golfklub that changed her view, “We agreed to start a team, and from there it just went on,” says Mette when talking about how golf became important in her life.

Mette had started to play around thirteen years of age with her older brother and mother, but says “It is not easy with two siblings in the same sport.” She quit golf for almost 12 years before returning when a boyfriend who played encouraged her to start again, “It was like riding a bike,” she says when describing the feeling of coming back to the game. For a couple of years, it was just for fun and then came the conversation amongst her friends to start a team. So what is it about the team feeling that is so important to Mette, who has competed for the Danish teams in both swimming and golf? “It’s like a family really, the same as it is with the EDGA tournaments, there are six of us here from Denmark [four men and two women] in this championship, but in the whole group we are about 20-25 players,” says Mette. It is that feeling of being together, doing her individual part of a collective objective that seems to drive Mette, and drive she has in bucket loads. As it is for most elite swimmers, there is training and more training, both wet and dry. In the pool for a couple of hours early in the morning before six or seven hours at school, and then another hour and a half in the water or the gym to complete the day. This relentless schedule of training can break even the strongest of competitors, and yet the discipline that they develop can stay with them for life.

The physical demands of such a training load are considerable, and of course, it is easy to forget that Mette is diagnosed as having a  cerebral palsy of her left side. The effects are particularly noted in the left side of her body, the leg and arm particularly where she has little strength. In swimming, she took part in the S10 classification where weakness affecting the legs, or missing legs below the knee are commonly found. This congenital disorder which can vary in severity affects one in every 500 people, resulting in more than 17 million people around the world having the condition. Mette has a milder form than her twin brother who is also affected, and both enjoyed being part of the community that was supportive to other sufferers, and now she is older she likes to give something back. Typical of the team player mentality, Mette devotes several hours a week on a volunteer basis to help others with a disability to have the experiences that she was afforded as a youngster at the swimming club. Twice per week, she gives a forty-five minutes swim class for beginners at Ringsted Handicap Idræts Forening along with a further three hours devoted to the more competitive swimmers.

Coaching has and continues to play, an essential role in the life of Mette. The swimming coaches were replaced by the club professionals at her golf club, and the physical trainer who helped her along the road to better health and fitness. With these personal experiences Mette has a clear understanding of what it takes to coach, after all, her contribution as a swim coach is meaningful to those she supports, but with typical modesty she explains that she is “not good enough” to coach golf although she goes on to say “I could help out with the juniors.” In many ways Mette has precisely the inquisitive mind that is important for a coach, she recognises that in golf for the disabled, some of the so-called rules for golf technique cannot work, “We have to tell everybody that they can play regardless of their disability we are here at The European Championships with eighty players and eighty different types of golf.” Every day she is inspired when looking along the range and seeing players with disability working on their games and most importantly smiling. Smiling is something that Mette does easily, it is rare to see her looking down or serious, although there must be times when she finds the going tough. Her maxim of “I play – I win,” helps as she realises that even to take part is a victory in some ways and when asked for what advice she would give to someone who has a similar disability to herself she says, “do everything you want in life, it may take a little longer, but try.” Mette has taken her own advice to heart and every day she tries to be better at everything she does.

Great chatting to Mette Wegge Lynggaard from Denmark who is currently 6 back going into the final day. She talks about her love of golf, you can read her full story at our player profile section supported by PING https://t.co/dzTyJycfP6 very soon…@EGA_golf @RandA pic.twitter.com/egkLSitDOT