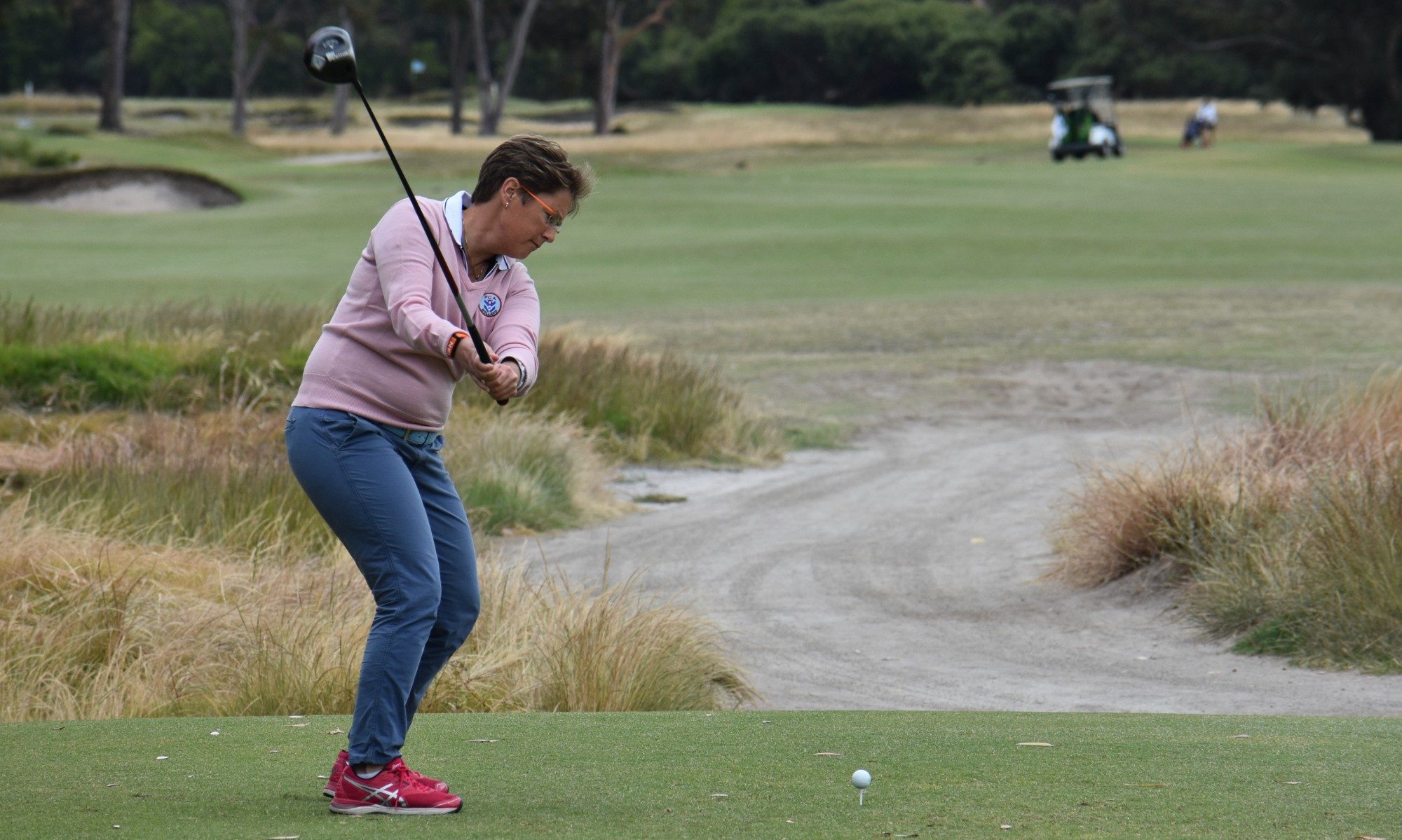 From time to time the surgeon would say that she should not play, “but there is always a way to play golf!” “Take the stairway, two flights up and go through the first door on the right,” said the poker-faced man in the white coat. These are the words that led to a diagnosis of Rheumatoid Arthritis for Marcella Neggers.

Who knows what was going through the mind of this eleven year girl as she confidently took one step at a time on the stairway? Eventually, she reached the top, turned the corner and entered a room where finally the pain in her right wrist would be correctly identified.

Marcella had been a good Field Hockey player as a kid, after all Hockey is something of a national sport in her homeland of The Netherlands. Marcella’s painful wrist had started to interfere with her performance, and like most youngsters, she thought that it would be fine in the morning. But it wasn’t fine, in fact if anything the wrist was getting worse. “Perhaps a break or a sprain,” said the Doctor. After a few weeks in plaster Marcella excitedly went to the hospital to have the cast removed only to find that her wrist was no better. Days turned into weeks as the anticipated improvement didn’t happen. It was during a visit to the Amsterdam Hospital that a specialist team decided perhaps this was not a bone related problem, but rather a rheumatoid issue. It was only then that Marcella took the stairs, stepped into a room and finally got some answers.

Her father Timo and mother Harriet introduced Marcella to golf. They both played golf and thought that the similarities of hitting a ball with a stick could be interesting for their daughter. Hockey was still running through her veins, and Marcella would take every opportunity to use the golf club like a Hockey stick when her parents and coach were not watching. Eventually, she found a golf buddy Sander, and with him, she could learn and enjoy playing golf. They started their golfing odyssey together, and for Marcella, her quest to be the best player in Holland began.

RA affects people differently, and for Marcella the pain of the right wrist was severe, but it was the mental anguish of living with a disease that eventually would progress to both elbows and her shoulders that was the most significant factor. Schooling was affected as she had to take days off, she had doctors’ appointments, multiple surgeries and pain to deal with. Meanwhile, Marcella’s dream of attending a sports college was effectively dashed as she realised that no longer could she take part in all the required sports. Her head was spinning, and it took time to come to terms with living a new life. Golf filled her heart and soul however, it became a driver as she grew up.

She soon became fully committed to becoming the best player that she could be. It was a simple, important ambition for a girl who had suffered as her original sporting plan had been scrapped. As things turned out, her drive and self-belief would be well founded as she would improve quickly to a very high standard, somehow juggling practice with the medical imperatives of consultation, surgery and rehab.

From 15 years of age, Marcella was part was of the national selection and she started winning and she never really stopped. First, it was the Dutch National Championship at girls level when she was just 17, and the titles just kept coming. Marcella had been motivated by her coach to reach the heights of amateur golf, achieving a handicap of +2, while the promise of a necklace for success had also been an early motivation. Marcella still wears the necklace today.

But it was the thought of being the number one player in Holland that kept her going through numerous surgeries. Two steps forward and one step back had become something of a normal progression for Marcella. Each new surgery meant she would have to find a new way to play, a new way to deliver the club to the ball, with power, accuracy, and consistency. From time to time the surgeon would say that she should not play, “but there is always a way to play golf!” says Marcella.

With a locker full of national honours, including Dutch golfer of the year in 1995 and 1996, it was time to try her luck at the professional game. She gained a conditional card at the qualifying school, which in those days was held in Portugal, and so it was off to try her hand on the Ladies European Tour. “I didn’t really like the life of the touring professional,” says Marcella. “Being without my friends and away from home didn’t feel good. I enjoyed the golf, and the travel was fine, but the loneliness was not so nice.”

The PGA of Holland training school beckoned, and it was there her new dream was first born to become a National Coach for The Netherlands. Marcella worked diligently and was appointed to precisely that role for the golfers with disability team in 2017.

Marcella now supports the players and their coaches in regular training and helps them to become the best that they can. “Training is always competitive,” says the newly appointed national coach, who gets together with the team regularly and accompanies them in many tournaments around Europe. A competitor through and through, Marcella thrives on pressure, loves the feeling of nerves and adrenaline that courses through her body when in competition. Who knows what she will do if she loses that competitive edge, but for now she is content with her life and enjoys pursuing the dream of going to the Paralympics either as a player or as a coach.

Marcella realises there are many opportunities ahead; there is lots to learn. So, like the 11 year-old Marcella on that stairway, she is still finding her way up the steps but confidently following her dreams. Whether she turns to the left or the right, she’ll get there, and many young and improving golfers in her care are sure to benefit. The best on first north for golfers with a physical limitation