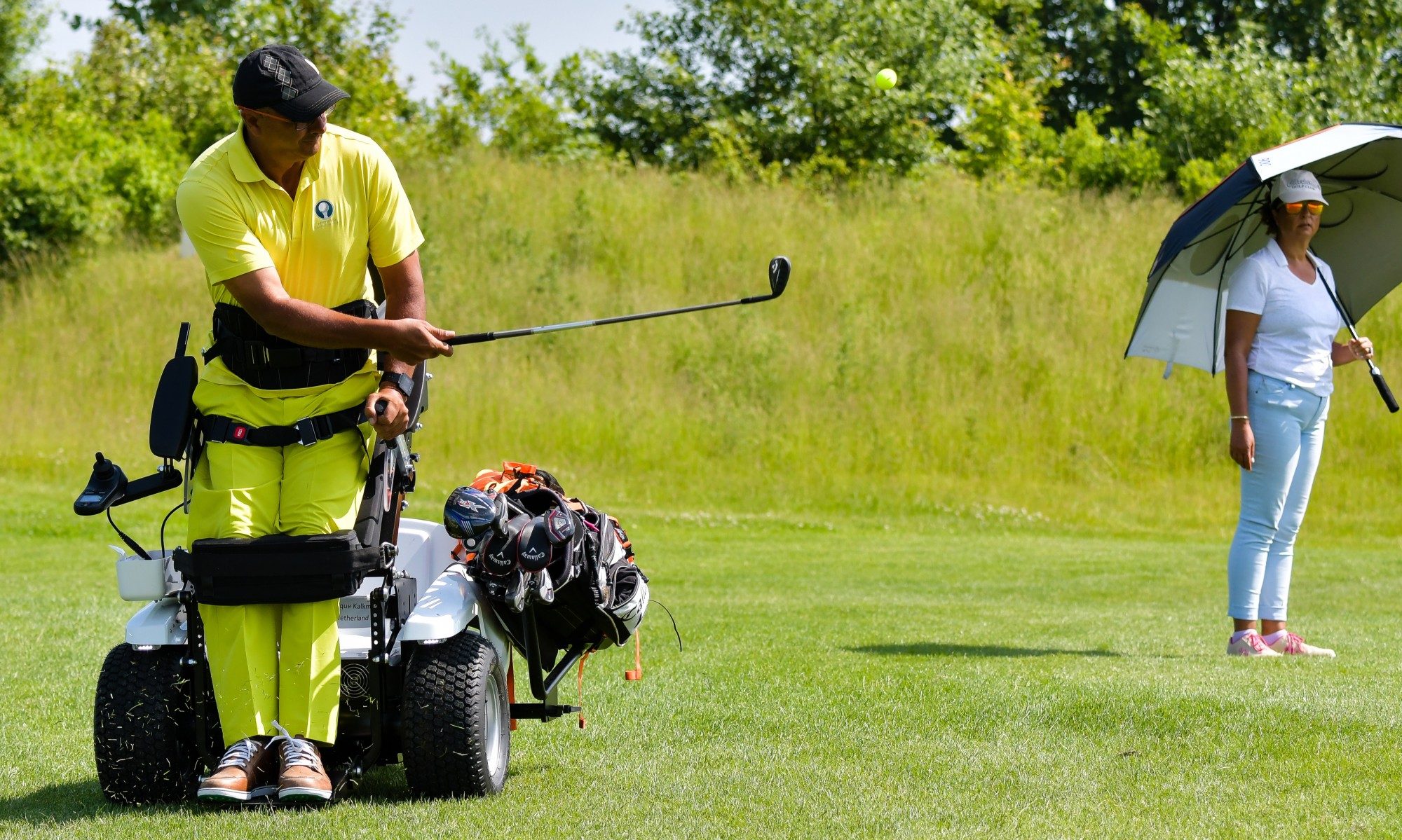 “People were crying as they saw me dragging myself by the hands to the sea but it was then that I felt the power that I could live my life.” If everyone started the day by looking in the mirror, smiling, and saying “from this moment onwards every person that I meet, I will smile to them,” do you think the world might be a better place? Well for Shlomo Ivgi that is part of his early morning routine, and he certainly thinks so.

Sport has icons which only use one name and are instantly recognisable: Pele, Maradona, Ali, Tiger, Senna and so on. Their fame is universal and transcends sport. In golf for the disabled, if you say the name Shlomo, everyone immediately thinks of a strong man who has a big heart and firm convictions.

Shlomo was injured when just 18 years of age while preparing in Sinai for his role on the battlefield. It is compulsory to undertake national service in Israel for both men and women. On one exercise to simulate the removal of an injured colleague, Shlomo was positioned at the front end of a stretcher. Behind him was a fellow soldier who still had a bullet in the chamber of his unlocked gun. Just one stumble and a few moments later having been accidentally shot in the back, Shlomo became a real-life casualty, who at first fought for his life, and then fought to find a way to live from a wheelchair having been paralysed by the accident.

He was taken to hospital in Beersheba, before spending almost two years in rehabilitation. During that first year, he didn’t want to do anything, he didn’t want to eat, didn’t want to speak to anyone, including his family, and not surprisingly he suffered from depression. Today, with the benefit of experience, Shlomo says it is ok to get depressed, it is just part of the process. Something had to happen to bring Shlomo back into the real world, and it came in the shape of a rookie physiotherapist called Tammy. She came to see Shlomo and immediately recognised this man had a big heart. Tammy said to him, “Please help me Shlomo, this is my first job and they will fire me if you don’t co-operate.” That was the moment when Shlomo took his eyes off himself and co-operate he did. This was just the beginning, but this rookie physio came day after day and would take his legs out of bed, sit him in a wheelchair and take him to rehab. She retired recently with a wonderful career of helping young men and women to live their new lives. A lot of support was available in Israel for the wounded troops. The rehabilitation centre had plenty of volunteers coming to visit and support. Shlomo has not forgotten and today carries out fundraising activities to ensure that such support is available to others in the future. It was meeting another wounded soldier who was also in a wheelchair that helped him realise that life was not over. Finally, he made the breakthrough when he said to the mirror, “ok Shlomo start to live – this is your life.”

With his “second life” just getting started, Shlomo had lots to learn, but learn he did. “Others also have to learn how to deal with people with disability,” he says, as he tells the story of taking his young daughters Revital, Liat and Kochav, down to the beach. “People were crying as they saw me dragging myself by the hands to the sea but it was then that I felt the power that I could live my life,” says Shlomo, “I have a wonderful life.”

Part of the rehabilitation was sport, many sports in fact. Shlomo took part in swimming, skiing, sailing and basketball. For 35 years he played and competed in everything but golf. Finally, and only after an injury to his arm, did he start to look at the game which is now an essential part of his life. Golf certainly grabbed his attention. “Sport changes people,” he explains and advocates the value of sport to people with disability. The Ceasarea Golf Club, under the leadership of Lior Preety and Michael Karasanty, is where you can often find Shlomo; it is as he says his “second home they are more than a golf club for us veterans, they support us and warmly embrace us.” In Shlomo’s opinion golf above all other sports, allows him the opportunity to meet new people on a level playing field, to meet strangers, to play together, to talk and understand each other. The conversation is open. “Golf is an amazing sport,” says Shlomo “we play together, disabled and abled. We share four or so hours on the course and another hour or so afterwards with a few beers,” and everyone goes on their way just a little bit different than a few hours before.

“When you swim or compete in other disabled sports you are part of the disabled family,” says Shlomo, who believes in the value of sport for everyone. The golf handicap system offers the opportunity for everyone to play together, and Shlomo is quick to add that, “If one day in the future someone says that everyone can play together in the Olympics, then I would be the first one there, I don’t need a category for that.”

Shlomo is keenly aware that golf, needs to be more available to youngsters and believes the game he so loves can help people understand each other better and help people to come together like no other sport, and so he is embarking on a project with other veterans to take golf into the schools, to get more kids into the game. He says that “disability is not a sickness”, and that in life most problems are small. He recognises that his life is better for the game that he now enjoys so much and he and fellow players with disability can help others to find and try golf.

Tomorrow can be different from today, Shlomo Ivgi is changing the perception of disabled people one by one. Tomorrow he will wake, look in the mirror, smile, and say, “Ok Shlomo live your life – from this moment onwards every person that I meet, I will smile to them”. Good advice.